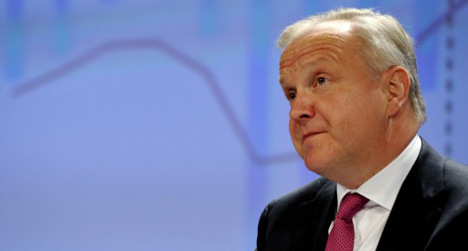 In the blog entry, the Finn appeared to give his support to an International Monetary Fund (IMF) model which would see Spain slashing wages by 10 percent to trigger economic growth and tackle unemployment in the country.

But a senior source at the European Commission has told The Local the Vice President's comments have been misinterpreted.

Rehn's "intention was to encourage a wider discussion around the issues regarding the economy in Spain". the European Commission source said.

That source was also keen to stress that  the commissioner "was not making any new, prescriptive recommendations for Spain".

Those prescriptive measures were contained instead in the Commission's Country-specific Recommendations, the source said, adding that the recommendations had also been accepted by Spain.

That document advises Spain to bring its budget deficit below 3 percent of GDP by 2016 through "expenditure restraint" and "revenue-increasing" measures.

The European Commission also said the Vice President's blog, which cited the examples of Ireland and Latvia, was about "encouraging all political and social stakeholders in Spain to look into other experiences in Europe with an open mind".

Rehn was not saying Spain should follow Ireland and Latvia's lead, but that the country should consider other experiences when determining its "policy mix".

The Commission's comments to The Local come in the wake of an angry response to Rehn's blog piece.

Fernando Lezcan, Secretary for Organization and Communications from the general workers union the CCOO, said Rehn's statements were "completely unacceptable" both because the IMF proposal wouldn't help Spain emerge from the crisis and for the suffering the plan would cause.

"There are millions of workers (in Spain) who earn in a month what Rehn spends on two dinners," said the PSOE Vice Secretary.

This is equal to the average annual salary in Spain, also slightly below €23,000 a year, Spain's stats office the INE said in late June.

Rato, a former Spanish economy minister, is accused of falsifying information about Bankia's finances to encourage investors to buy into its stock market listing.

He will stand trial along with 30 other former Bankia executives for investor fraud and for falsifying 2010 and 2011 accounts, Spain's High Court said in its ruling.

The court will also put Bankia itself and its parent company BFA on trial over the failed listing, as well as accounting firm Deloitte and one of its employees. Deloitte audited the lender's accounts.

Bankia was rescued in 2012, less than a year after it was listed, and tens of thousands of small investors who had converted their savings to shares lost everything.

The near-collapse of Bankia almost brought down Spain's whole financial sector, which was bailed out later that year by international creditors for 41 billion euros ($48 billion).

When Rato was questioned in court in 2012 over the Bankia listing, he reiterated his claims that Spanish authorities held responsibility for events at the lender including the timing of its ill-fated stock market flotation.

Public prosecutors in June asked that Rato, 68, be given a five-year jail sentence over the Bankia listing.

They have argued that as the bank's “main executive,” he was “fully aware of the inconsistency of the Bankia project and of its financial weakness” but still gave the green light for the listing.

Bankia was created in 2010 by merging seven regional savings banks, part of a financial sector shake-up brought on by the collapse of a construction boom that dragged Spain into a severe recession.

Rato was sentenced in February to four years and six months in a separate case for misusing funds when he was the boss of Bankia, and Caja Madrid before that.

Rato and the other executives were accused of having paid for personal expenses with credit cards put at their disposal by the lenders, without ever justifying them or declaring them to tax authorities.

Rato denied any wrongdoing and said the credit cards were for discretionary spending as part of executives' pay.

He was allowed to remain free and without judicial supervision pending a final verdict in the case.

And Christine Lagarde, who took over from Strauss-Kahn and is the current IMF chief, was found guilty of negligence over a massive state payout to a tycoon when she was French finance minister, though she received no penalty.