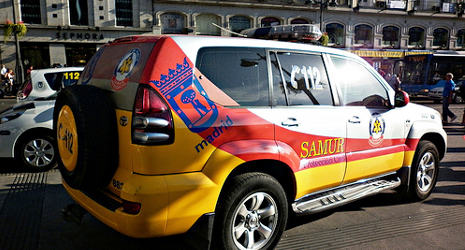 Premature deaths are more common in the south of Spain for all mortality causes and for both men and women. Photo: Madrid Emergency Vehicles/Flickr

The mortality atlas which covers the years 1984 to 2004 shows a Spain divided along health lines.

Premature deaths are more common in the south of Spain for all mortality causes and for both men and women, the atlas compiled by a team headed by two professors at Barcelona's Universidad Pompeu Fabra shows.

The south of Spain was particularly hard hit in terms of deaths from cardiovascular illnesses, strokes, diabetes and hypertension, according to Spanish science news site Materia.

"The inequalities in mortality will surprise some and that is part of the objective," said Ildefonso Hernández, professor in Public Health at Elche's Miguel Hernández University .

The atlas also showed that there was plenty of room for bridging the gap in health outcomes, the professor added.

Heart attacks were the main cause of death (14.9 percent) for women in the period in question, the atlas shows.

Some half a million women died from this cause from 1985 to 2004, with Extremadura, Andalusia, Murcia, Valencia and the south of Castile–La Mancha being over-represented.

Among men, coronary ischemia was the number one cause of death, making up 11.5 percent of all deaths in the two decades covered by the atlas.

Again, southern areas including Sevilla, Cádiz, Huelva and Extremadura, and the Canary Islands featured prominently, as did the Balearic Islands.

"A mortality instrument is an instrument for seeing large-scale patterns and planning public health," said Joan Benach, a professor at Universidad Pompeu Fabra and one of the study's authors.

"If there is a high-risk zone, planners have to do something," said Benach.

But Danny Dorling of the UK's Sheffield University, author of similar atlases for the UK, said the maps showed the "geography of poverty and wealth".

Dorling said mortality patterns reflected a historical legacy of industry and agriculture, the geography of tobacco consumption and the immigration.

"Inequalities in mortality are the worst kind of all," said Dorling in the prologue to the new atlas.

"It is unlikely that the geography of mortality shown here and in other atlases of mortality for other countries is not strongly related."

"The politics of recent years and recent reductions in benefits which affect the welfare state could have serious health consequences in the long term," said professor Ildefonso Hernández in his introduction.