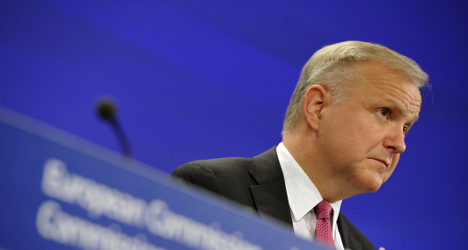 Writing in his blog, the top economist — also the European Commissioner for Economic and Monetary Affairs and the Euro — backed a plan which the IMF claims could trigger economic growth and cut unemployment by 6 to 7 percent by 2016.

Rehn said he recognized the political difficulties of such a plan, but argued it "would be worth a serious try, for the sake of those millions of young Spaniards who are currently unemployed ".

But Spain's economic and political forces were quick to come out against the European Commissioner.

"There are millions of workers (in Spain) who earn in a month what Rehn spends on two dinners," said Elena Valenciano, second-in-command with Spain's opposition socialist PSOE party.

"What Spain needs are politics of reactivation and not cuts," said the Asturias-based MP for the left-wing Izquierda Unida party Gaspar Llamazares.

"It's unacceptable for the European Commission to make recommendations to a member country via his blog."

Similary, Fernando Lezcan, Secretary for Organization and Communications from the general workers union the CCOO, said Rehn's statements were "completely unacceptable" both because the IMF proposal wouldn't help Spain emerge from the crisis and for the suffering the plan would cause.

And top Spanish employer organization the CEOE said in a statement that Spain's workers and businesses had already agreed to salary cuts for 2012, 2013 and 2014.

The PP politician described the European Commissioner's comments as a "simplification" with a "media impact" far greater than warranted.

For a real internal devaluation Spain would also need a "drop in prices" Pujalte said.

This would include drops in business costs and end prices for consumers.

The average salary in Spain is just under €23,000 a year, Spain's stats office the INE said in late June.