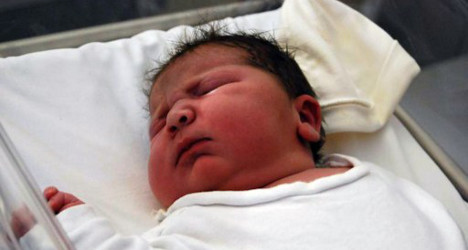 Maxime Marin delivered the baby at 4:43 am at the Hospital Marina Salud in the Mediterranean city of Denia, the hospital said in a statement.

Larger babies are often delivered via caesarean section, but Marin did not even need an epidural, a painkiller delivered into the spine during childbirth.

Marin, who lives in Spain with her partner who is from Colombia, said she knew the baby would be big “but not that big”, the statement said.

She has given birth to three other children, all of them weighing at least 4.5 kilos when they were delivered.

Both the baby— named Maria Lorena Marin—and the mother are doing well after the birth although the newborn remains in the neonatal care unit.

The hospital said the baby is the “biggest baby ever born in Spain through natural childbirth.”

“In my 40-year professional career I have never known of any case of a birth with this weight by natural childbirth. We are all very satisfied with the work which we carried out,” the head of the hospital’s department of obstetrics and gynaecology, Javier Rius, said in the statement.