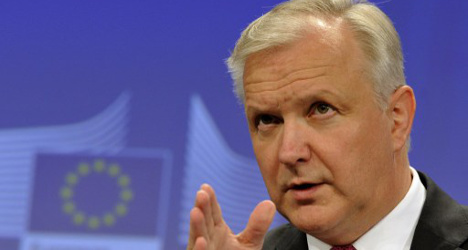 The International Monetary Fund (IMF) caused a stir recently when it said Spain should look at cutting wages to boost jobs growth.

The country was facing structural unemployment of up to 18 percent at the end of the decade, the organization said, touting "faster wage adjustment" as a way to bring down job losses.

To back up its case, the IMF suggested Spain could cut wages by ten percent, and suggested this would lead to increased exports and a 5 percent rise in GDP over three years.

The organization also said such a move would push down unemployment drop by 6 to 7 percent by 2016.

The IMF proposal was, however, shouted down in Spain with unions and political parties across the spectrum coming out against the proposal.

But the Europe Commission's second-in-command Olli Rehn has now come out in support of the IMF wages proposal in a blog piece published on Tuesday.

In the article, the Finn, also the European Commissioner for Economic and Monetary Affairs and the Euro, gave the European economy a gentle pat on the back.

Spain also came in for some praise with the top economist citing the country's one percent trade balance surplus in 2012 and recent improved jobless figures.

But Rehn stressed unemployment remained "unacceptably high" across Europe and that a "rebalancing and reform" of the European economy was "clearly underway".

Rehn also backed the IMF proposal for broad-based ’social agreement’ between "employers and trade unions on an internal devaluation".

This would see "employment increases (and price cuts)" in exchange for unions giving the green light to "significant further wage moderation".

"Such a rise in employment and lower inflation would boost consumption growth," said the European Commission's Vice President.

Rehn recognized the political difficulties of such a plan, but argued it "would be worth a serious try, for the sake of those millions of young Spaniards who are currently unemployed ".

The economist concluded by citing the examples of Ireland and Latvia as examples of economic reform and internal devaluation.

Rehn's analysis is unlikely to be welcomed by Spain's unions.

Similary, Fernando Lezcan, Secretary for Organization and Communications from the general workers union the CCOO, said it was higher wages that would reactivate the economy.

Lezcan told Spanish news agency Europa Press that IMF predictions for Spain were in stark contrast to the "triumphalist" pose of a Government which was saying the country was coming out of the recession.