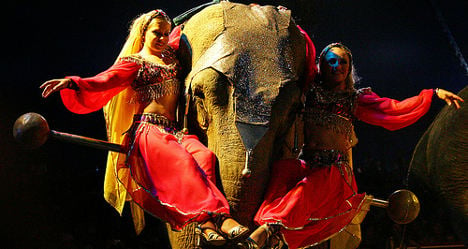 Circus elephants are no longer on the bill in the Basque capital Vitoria. File photo: Leonid Mamchenkov

Every year the people of Vitoria gather in their thousands to celebrate their Fiestas de La Blanca festival.

For the people in the northern city — the capital of Spain's Basque Country — the six-day event is every bit as important as San Fermin and its running of the bulls in nearby Pamplona.

And like Pamplona, Vitoria has traditionally included events involving animals in its line-up.

But this year Vitoria's festivities have been affected by new town bylaws which prohibit the use of wild animals in public displays and spectacles.

According to Spain's La Vanguardia newspaper, the ban originally put forward by Basque nationalist party Bildu has meant  big changes for the visiting circus known as the Gran Circo Mundial.

Circus posters no longer feature tigers and other beasts: instead, there is a picture of the Man of Steel.

More dramatically though, Vitoria's long-running 'breakfast of the elephants' — the spectacle features the animals gorging on fruit — has also been scrapped.

Originally backers of the Basque capital's new animal protection laws had wanted to ban the use of both domestic and wild animals in such public displays.

But opposition to the move meant this was diluted to exclude domestic animals. And among the 'domestic' animals are bulls — a definition which has saved the city's corridas, or bullfights.

It's a contradiction which has riled locals.

"It's crazy to get rid of wild animals from the circus and keep the bulls," one circus goer told Spanish newspaper El País.

The exclusion of domestic animals from Vitoria's new bylaws has also saved another traditional event in Vitoria: the annual donkey race.

The popular event, generally considered a rehearsal for the Virgen Blanca festivities takes places every year on the July 25th, or the Día de Blusa.

In the donkey race, the notoriously stubborn beasts are coaxed and wheedled towards the finishing line.

Each rider has a companion who drags or pushes the unwilling animal in that direction.

This year's donkey race was, however, beset by controversy before it even began with animal rights groups calling for the event to be cancelled.

"It's insulting to the image of the city, and it's out-dated," Tamames added.

Finally an agreement was reached between organizers and protesters after event participants promised they would be civilized in their treatment of the animals.

"This is a tradition we can't give up on," livestock breeder Gabriel Urruela said in response to opponents of the donkey event.

"They (the donkeys) are treated better than people in many cases. They treat them like movie stars."