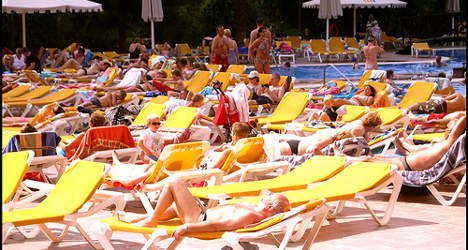 Spain’s Balearic and Canary Islands are the two most popular destinations for British holidaymakers this summer, according to ABTA. Photo: Fernando Noguera/AFP

In fact, a joint study by the travelling body with the UK’s Foreign and Commonwealth Office found that 90 percent of British tourists had been to Spain once before and 50 percent ten times before.

“A real trend ABTA has been seeing this year is consumers seeking value and familiarity in tried and tested short haul destinations,” a spokesperson for ABTA told The Local.

“Spain, where the food, culture and weather are much enjoyed by Brits, fits this perfectly.”

Other Mediterranean destinations like Greece, Turkey and Tunisia are also high on ABTA’s list, but as a report by The UK’s Post Office points out , Spain’s low prices could be acting as a further incentive for penny-pinching British tourists.

Spain’s Costa del Sol beat off all opposition with cheaper products like coffee, beer, ice cream and bottled water than in the Algarve, Cancun, Corfu and many others.

Check out The Local's List on Spain's top ten beaches.