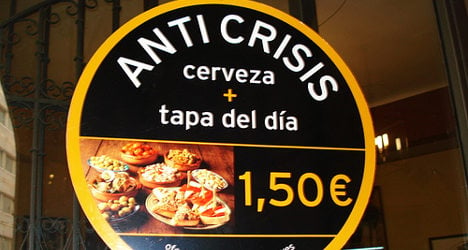 Many Spanish bars and restaurants have lowered prices to attract customers during the country's crisis. Photo: RachelH_/Flickr

The business daily suggested that Spain's widely vilified cost cutting strategies might be about to bear fruit.

In its analysis of the country's prospects, the paper said the country had, in the last five years, "become a giant laboratory for an experiment never before attempted in a modern democracy".

"Is it really possible for a country to achieve a so-called internal devaluation—restoring its competitiveness by cutting wages and boosting productivity rather than lowering its external exchange rate?" the Wall Street Journal (WSJ) asked.

The answer, for the paper at least, is a tentative yes.

To support this conclusion, the business daily cited latest bank of Spain figures showing the Spanish economy shrunk by just 0.1 percent in the second quarter of 2013.

Spain's unemployment rate fell for the fifth month in a row in June, figures released on Friday by Spain's Employment Ministry show. This means Spain has seen a 340,000 strong reduction in unemployment in the last five months.

The WSJ also raised the matter of the country's rising exports — up 8 percent in 2012 — as well as Spain's current account figures.

In July the Spanish government reported that the country's trade deficit narrowed sharply to just €27.5 million ($36 million) in May largely due to booming exports.

Instead, the WSJ highlighted that the collapse in Spain's construction sector "appears to have run its course".

And while the paper recognized that Spain's public sector would continue "to be a drag on growth", it said the private sector had "regained its competitiveness".

The WSJ said  Spain was now in the position to experience a "business-investment-led" recovery, adding foreign direct investment in the country was on the rise.

Adding to the good news for Spain, for the WSJ, was the "growing investor consensus" that recapitalization of the country's banks in 2012 and Bank of Spain efforts to improve the health of the banking sector were beginning to reap rewards.

The newspaper finished its positive report by quoting Berenberg Bank chief economist Holger Schmieding as saying Spain could be growing at close to 2 percent by year by the end of 2014 once the impact of fiscal consolidation was stripped out.

But the WSJ also warned the risk of political instability in the wake of Spain's slush fund scandal.

The paper also noted the danger of continued high unemployment and the need to find work for the 15 percent of workers who had been employed in the construction sector.

The other danger was the risk credit agencies would devalue Government debt to junk bond status, but the WSJ said this "would be perverse" at a point when Spain's economy was turning the corner.

The WSJ concluded by saying Spain should ensure further fiscal consolidation should be "based on growth-friendly reform rather than further damaging tax hikes".

The full Wall Street Journal article can be read here.