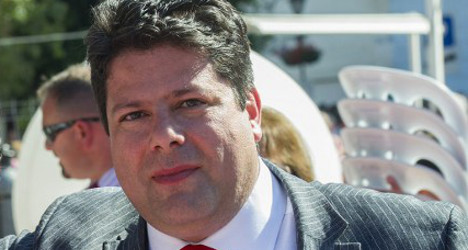 "We have seen it before during Franco's time during the 1960s," Gibraltar Chief Minister Fabian Picardo said in an interview with the BBC on Monday. Photo: Marcos Moreno/AFP

The British outpost in the Mediterranean, known as the "Rock," was outraged by Spanish Foreign Minister Jose Manuel García Margallo's comments in an interview published on Sunday in conservative Spanish daily ABC.

It was the latest in a string of spats going back decades between Spain and the "Rock", frequently sparked by disputes over fishing rights around the British outpost that Madrid wants to reclaim as its own.

"What we have seen this weekend is sabre-rattling of the sort that we haven't seen for some time," Gibraltar Chief Minister Fabian Picardo said in an interview with Britain's Radio 4.

"The things that Mr Garcia-Margallo has said are more reminiscent of the type of statement you would hear from North Korea than from an EU partner," he added.

"We have seen it before during Franco's time during the 1960s but I think all of us hoped that those politics were never going to come back," Gibraltar's political chief said.

In the interview with ABC, Spain's foreign minister complained about Gibraltar's decision to build an artificial concrete reef in surrounding waters so as to stop alleged incursions by Spanish fishing boats.

– Introducing a €50 tax to enter or leave Gibraltar, bringing in money that could be used to help Spanish fisherman who had suffered from Gibraltar's new reef

– Stopping at the frontier any deliveries of concrete or other materials required to build the reef;

Spain ceded Gibraltar to Britain in 1713 under the Treaty of Utrecht but has long argued that it should be returned to Spanish sovereignty.

Britain refuses to do so against the wishes of Gibraltarians.

The latest spat came after Gibraltar accused Spain of deliberately holding up cars entering the territory by searching every vehicle and creating delays of up to six hours.

Britain's Foreign Office said in a statement on Sunday the border delays were "disproportionate".

The delays ended on July 29 after British Foreign Secretary William Hague phoned Garcia-Margallo to express "serious concerns" at the stoppages and Britain's Foreign Office formally protested to the Spanish ambassador in London.