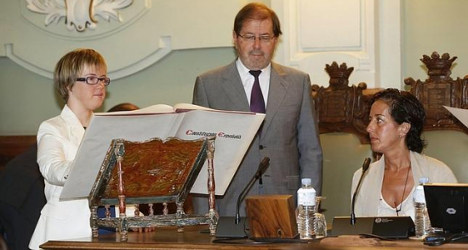 Angela Bachiller is sworn in as Valladolid's newest town councillor. Photo: Down España

On Monday Bachiller began her job as a representative for Spain's conservative Popular Party in Valladolid — a role she took on after the previous holder of the post was forced to resign over corruption charges.

"I don't like dishonest politicians and those who don't work for the people," Bachiller told Spain's La Vanguardia newspaper recently.

This native of Valladolid has known for some time that she would be taking on her new political role, but her family have kept her out of the spotlight until she was officially named as the city's newest councillor.

This week, though, she was finally able to celebrate.

"I'm very excited, a bit nervous and surprised that there has been so much media attention," Bachiller told Spain's La Vanguardia newspaper.

"It was a special moment in my life."

She takes on her new job after working for two and a half years as an administrative assistant in Valladolid's Department of Social Welfare.

In 2011, Bachiller just missed out on a spot as a town councillor for the city, but won many friends during that campaign.

In the wake of those elections, city mayor Francisco Javier León de la Riva described her as "an example of strength and of someone overcoming obstacles".

People close to her have also praised the new town councillor.

Her mother described her as "prepared, qualified and discrete" while her father told Spanish national radio station Cadena Ser that Bachiller was "a very responsible and stubborn kid".

If she had to get up at six o'clock instead of seven to study because she was finding it (the schoolwork) harder, she would," he told El País newspaper.

Her boss in Valladolid's social welfare department Rosa Hernández said: "The most important thing is that her family didn't overprotect her".

"She's tenacious and capable of carrying out her work at all times.

Bachiller's new role will see her taking part in municipal plenary sessions and other meetings.

The outgoing young woman is also a strong believer that people with disabilities should be allowed to vote.

"I've always voted since I was 18 years old, but other people (in my situation) have never been able to," Bachiller told La Vanguardia.

While people in Spain with intellectual disabilities are theoretically entitled to vote, many can find themselves unable to do so under current legislation.

When Spanish judges declare people with disabilities 'incapacitated', they automatically lose the right to vote.

"We (people with disabilities) want the laws relating to the right to vote changed," Bachiller told La Vanguardia.

Asked whether she thought it should be normal for people with disabilities to work as politicians, she replied: "Yes, but I have to admit that not everybody dares to include us on their electoral list."

While Bachiller hopes that she doesn't become the first and only politician with Down Syndrome in Spain, she recognizes the road ahead will be tough.

But it's not all about work for this young woman.

In her free time, Valladolid's newest councillor studies English and plays piano, "very well" according to her father.

As Bachellor puts it: "Don't get stressed, get busy!"