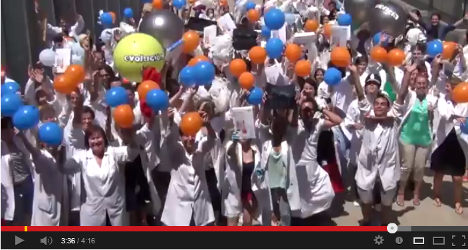 The Valencia team chose Good Time by Owl City and Carly Rae Jepsen as their song to accompany an upbeat, colourful video filmed in one single take. Photo: YouTube

Optimism has been hard to come by at the Príncipe Felipe Research Centre in Valencia ever since 114 of its 240 staff members were given their marching orders in 2011.

Those who were lucky enough to keep their jobs had to endure a pay cut of between 5 and 15 percent.

Funding for medical investigations into Cancer, Alzheimer’s and Parkinson’s have all been progressively lowered as the centre, which cost €60 million when it was set up in 2005, started to suffer the consequences of Spain’s crisis.

“Everyone would talk about the same thing, there was always bad news on the way,” receptionist Pilar Fortea told local daily El Mercantil Valenciano.

But news of an upcoming lip sync competition among Spain’s R+D centres inspired Pilar to encourage her peers to take part as a way raising morale.

The Valencia team chose Good Time by Owl City and Carly Rae Jepsen as their song to accompany an upbeat, colourful video filmed in one single take.

“We put it together in our lunch breaks and after work,” Pilar told El Mercantil Valenciano.

“It’s been a great way to get everybody together and send out a positive message about science.”

The video with the highest number of YouTube views will be given a €3,000 prize by the competition sponsors, lab sourcing company Scharlau.