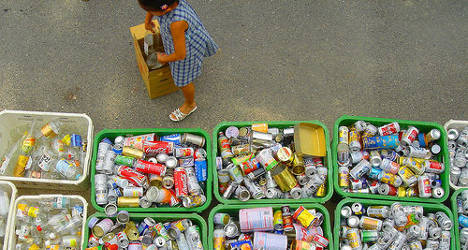 European Union countries have been set targets which should have them recycling 50 percent of household waste by 2020. Photo: Timothy Takemoto

On top of that, every second plastic container in Spain ends up in a recycling bin.

That's according to a study carried out by the non-profit organisation Cicloplast together with Madrid's Carlos III university and the University of Malaga.

The study also found one in six of all 'green' jobs in Spain is linked to household recycling.

But data from European Environment Agency (EEA) for 2010 — the last year for which figures are available — continues to put Spain near the bottom of the Western European municipal waste recycling table.

Austria (63 percent), Germany (62 percent) and Belgium (58 percent) recycled the largest proportion of municipal waste in Europe in that year.

In Spain, however, this rate was just 33 percent, although this had increased from 21 percent in the decade since 2000.

The EEA said in February it would be very difficult for Spain and most European countries to meet EU-mandated targets to recycle 50 percent of household and similar waste by 2020.