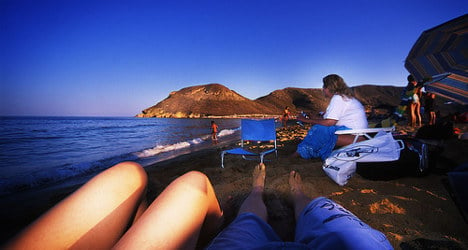 German tourists were the only ones who increased their average daily spending in Spain in June. Photo: Daniel Flower

A new study released on Monday by Spanish government tourism agency FRONTUR shows 26.1 million foreigners took holidays in Spain in the first half of 2013, 1.1 million more than in the same period in 2012.

With approximately 40 percent of the market share, Brits and Germans still make up the majority of holidaymakers in Spain, although Scandinavian visitors represented the biggest increase in numbers.

The Balearic Islands were the most popular regional destination for tourists in June, but it’s Catalonia that received the highest numbers for the year so far with 6.6 million visitors.

Tourist spending for the first half of the year was also up compared to 2012 figures, with holidaymakers pumping €24.4 billion into the Spanish economy in the last six months — a 6,6 increase overall.

According to a study by Spain's Ministry of Tourism, average per person and per day spending from January to June grew 2.2 and 2.4 percent respectively.

June is the only month so far in 2013 which has seen a drop in individual and daily outgoings (down €4 euros to €109 per tourist per day), but the record rise in tourist numbers has compensated for these losses.

German tourists were the only major national group to spend more in June, mainly in the Balearic Islands.