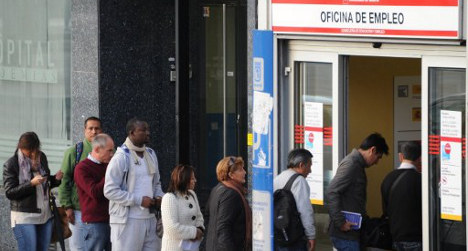 Spain now has the second-highest level of unemployment in Europe after Greece. Photo: Dominique Faget/AFP

On the back of demand for workers during the tourist season, the number of jobless people fell by 225,200 over the quarter to reach a total of 5,977,500 unemployed, dipping under the psychological barrier of 6 million, according to the national statistics office (INE).

"If we compare the development of unemployment of this quarter to the same quarter during the last five years, it must be underlined that the fall in unemployment is the biggest since 2008," the INE said of its survey of Spain's active population (EPA).

Spain now has the second-highest level of unemployment in Europe, after Greece, which posted a jobless rate of 26.9 percent in April.

During the first quarter, Spain's jobless rate was at a record 27.16 percent.

Thursday's improved data came a day after the Bank of Spain said the Spanish economy, the fourth-biggest in the eurozone, seemed close to a recovery.

It also adds to a wave of good news in the eurozone, with business data showing that the bloc may be on the road out of recession.

Spain, once the motor of job creation in the 17-nation single currency area, is now struggling through a double dip recession brought on by the collapse of a property boom.

Its economy contracted by 1.37 percent last year, the second worst yearly slump since 1970, and the government forecasts it will shrink again by between 1.0 percent and 1.5 percent this year.

Nevertheless, the government has also repeatedly signalled in the past month that the economy is about to get back on track on the wave of resurging exports.

Spain's INE, however, conducts a survey (the EPA) of 65,000 Spanish households to obtain its results.