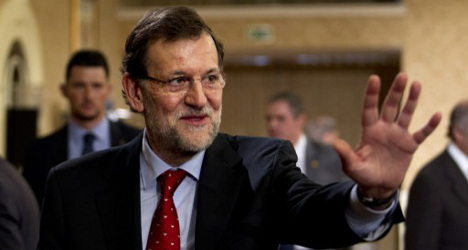 Spanish Primer Minister Mariano Rajoy at a meeting of EU foreign ministers on the topic of the “Debate on the Future of Europe” in Majorca on July 19th. Photo: Jaime Reina/AFP

The survey, published in the El Mundo daily, showed 89.1 percent of those questioned believed Mariano Rajoy should respond to allegations that he took secret payments from his party.

Only 2.4 percent of people thought Rajoy — who has said he will not step down over the affair — had no need to provide his version of events.

Pressure has increased on the Spanish leader over the past week with fresh indications he may have received illegal payments from a slush fund run by his Popular Party's former treasurer, Luis Barcenas.

The survey showed that just under two-thirds (65.6 percent) of respondents believed Rajoy had received payments, with 19.6 percent saying the opposite.

To date, the absolute majority enjoyed by Rajoy's party since his landslide election victory in 2011 has blocked calls for him to face questions in parliament over the scandal.

Opposition Socialist leader Alfredo Perez Rubalcaba has threatened to introduce a motion of censure against Rajoy if he does not appear.

Rubalcaba told the centre-left daily El Pais on Sunday that Rajoy "cannot continue to govern if he does not explain" the scandal in parliament.

Rajoy has batted off calls to resign as he fights a crippling recession and an unemployment rate of more than 27 percent.

The Prime Minister has denied any wrongdoing in the controversy, which first erupted in January when a newspaper published copies of account ledgers purportedly showing irregular payments to top party members.

Deputy Prime Minister Soraya Saenz de Santamaria, who is also government spokeswoman, told reporters on Friday that Rajoy "will give his explanations at the time and in the manner he feels appropriate."

"I have no doubt he (Rajoy) will appear when he considers the timing to be right," said Garcia-Margallo, who also expressed his "absolute confidence in the embattled Spanish leader.

Some 1,000 people were questioned for Sunday's survey, carried out by the Sigma Dos polling institute between July 16 and 18.