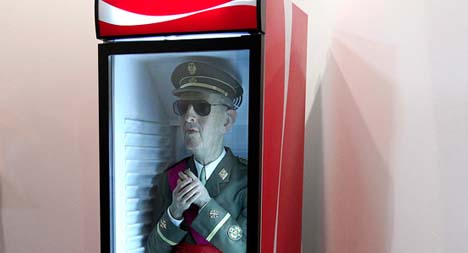 The artist has said the initial idea behind the sculpture was to showcase how Franco was frozen in Spanish people’s minds rather than to mock the former dictator. Photo: Camille Manceau

As soon as the Franco Foundation – an organization devoted to perpetuating the memory of the “Generalísimo” – got hold of the news, they decided to sue the sculptor for dishonouring the former dictator.

The foundation, headed by Franco’s daughter, told the Regional High Court of Madrid last Thursday they would be asking Merino to pay €18,000 in damages.

The public prosecutor, however, asked for the charges to be dropped because the work was “in keeping with current social usage”.

The judge found Merino not guilty on Wednesday.

The artist told national daily El País that the initial idea behind the sculpture was to showcase how Franco was frozen in Spanish people’s minds rather than to mock the former dictator.

“The bigger a deal they make of this, the more people support me,” Merino said outside the court in reference to the Franco Foundation’s insistence on pursuing the case.

“They’ve already buggered me and got what they wanted: publicity.”

Franco, who ruled Spain from 1936 till his death in 1975, is usually absent from public discourse in modern Spain.

Franco’s last official statue was pulled down in 2008, although a massive mausoleum he built is still home to a monastery and looms over the Valle de los Caídos (Valley of the Fallen) near Madrid.