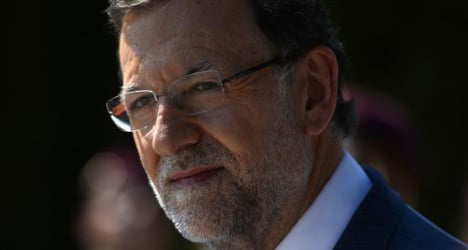 "It was necessary to raise taxes," Rajoy told members of Spain's Business Competition Council (CEC), defending his government's decision to introduce a series of tax hikes during Spain's long-running crisis.

Rajoy then added that Spain still enjoyed some of the lowest tax rates in Europe, Spain's El País newspaper reported on Wednesday.

The Spanish leader also reminded the country's business leaders he had set up a working group to hammer out the details of an overhaul of the tax system.

That group would look at ways to improve tax collection and lower taxes, Rajoy said in the meeting held at the Prime Minister's palace of Moncloa.

During the meeting, the Spanish leader said he was "moderately optimistic" with how Spain's economy was progressing and he stated Spain was now exiting its recession.

"The rate of recuperation depends on the flow of credit and the decisions that Europe makes," said Rajoy, noting that a recovery in confidence was also key.

The Prime Minister was also defiant he would complete his full term despite calls for his resignation over claims he received under-the-table cash payments from Luis Bárcenas, the ex-treasurer of Rajoy 's ruling Popular Party.

The ex-party official alleges he operated a slush for the party. Rajoy has refused to comment publicly on the issue, but has stated several times he plans to stay in office.

CEC members said they hoped the government would forge ahead with its work because "political stability is what paves the way for a strong economy and a way out of the recession".