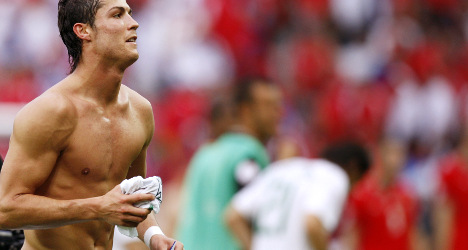 It caps what has been a great year for the Portuguese player both on and off the pitch.

He scored 53 goals in all competitions and kept up his high-profile relationship with Russian model Irina Shayk.

Check out The Local's List of Spain's top ten hottest male sports stars in all their sweaty glory.

Taking second place in the poll was Toledo tennis player Feliciano López, who nabbed 27 percent of the vote.

The player, now ranked 31 in the world, probably receives more accolades for his biceps than this powerful serve these days.

Hot on the heels of López was Spanish goalkeepers Iker Casillas.

Casillas, rarely out of the newspapers, is one half of what must be one of Spain's most glamorous couples.

His long-term girlfriend is the reporter Sara Carbonero. No stranger to stares herself, Carbonero was named the World's Sexiest Reporter by FHM magazine in 2009.