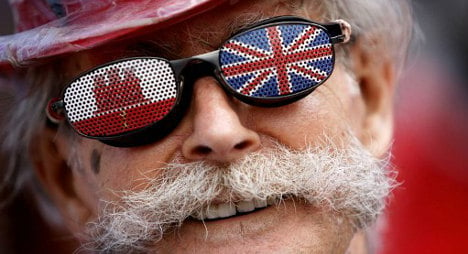 Which rock legend got married on The Rock? Photo: Jose Luis Roca/AFP

On July 10th, the 6.8-square kilometre territory of Gibraltar celebrated the 300th anniversary of the signing of the Treaty of Utrecht.

That momentous occasion saw Spain's King Felipe V hand over the “entire property of the city and the castles of Gibraltar, along with its port, defences and fortifications” to the British Crown “with full rights and forever”.

It hasn't exactly been plain sailing for The Rock since then though.

Click here to check out The Local´s gallery of ten little known facts about The Rock.

The existence of this little British territory on Spain's south coast remains a prickly thorn in the side of relations between the UK and Spain.

Recently, two separate incidents have seen diplomats on both sides of the “fence” spitting chips.

In the first, Spanish Civil Guard officers are alleged to have shot at a jet skier in the waters of Gibraltar.

The second storm in a teacup saw Spanish fighter jets taking a shortcut over UK airspace on their way to an aircraft carrier.

Then there are the every day hassles faced at the border by the 7,000 Spaniards who work in Gibraltar.

And despite ongoing talks between Spain and the UK over the future of The Rock, it doesn't seem as if rapprochement is in the pipeline.

“Wake up and smell the coffee:  Gibraltar will never be Spanish,” the Chief Minister of Gibraltar Fabian Picardo said in 2012.

Meanwhile, in March, Spain's Foreign Minister in March said he had “never set foot on Gibraltar” and wouldn't “do it until a Spanish flag” is flapping on The Rock.

Read on to see The Local´s gallery of Ten things you didn't about The Rock.