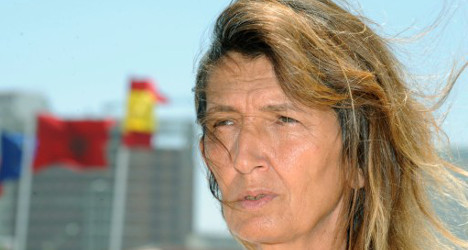 Maria Galant, a Spanish worker who came to Morocco to work at a call center following the economic crisis in Spain. Photo: Fadel Senna/AFP

Emilio Rodriguez runs a small construction company in Tangiers in northern Morocco where, like many other Spaniards, he has moved in search of fresher professional pastures.

"In Spain at the moment things are going badly," he says.

"Over there I sold everything. There is no work, no bank financing," adds Rodriquez, who moved to Morocco's port city of Tangiers, just spitting distance from the southern tip of Spain, at the beginning of 2012.

For decades Moroccans have been migrating abroad in search of better lives — they form one of the largest immigrant populations in Europe — and Spain hosts the second biggest community.

Over the years, Spaniards have also crossed in the opposite direction, looking for business opportunities.

However, the severe crisis in the Spanish economy has seen a noticeable rise in the flow of people heading south, say social workers.

Numbers are difficult to assess because many Spaniards arrive as tourists and return to their homeland every three months to collect their unemployment benefits and ensure they do not overstay their visas.

Official figures show that 2,660 Spaniards registered for social security in Morocco in 2012, slightly up from 2,507 in 2011, but the numbers actually living and working in the country are believed to be far higher.

At a macro-economic level, Morocco's key trading partners are Spain and France, the former colonial power that divided and ruled the country as a protectorate.

Jose Manuel Fernandez is among the newcomers exploring what Morocco has to offer.

"I came to see how it goes here. I saw there were lot of facilities, ways of doing things to develop the country, especially in the construction sector," says Fernandez, who works for a Spanish company that specialises in building golf courses.

But Morocco has economic woes of its own.

Despite a growth rate in recent years of between 2.5 and 5.0 percent, which is closely linked to annual agricultural output, youth unemployment stands at more than 20 percent.

This has not deterred the Spanish hopefuls.

"I arrived in Tangiers with my daughter three months ago. I'm looking for a job," says Marian Gallande as she sips mint tea in a café not far from the old port.

For her too, life in Spain had become difficult.

"I prefer to be in Tangiers. Spain is my country, it's true," she adds, watching the ships leaving Tangiers, "but I am more at ease here, where society is not closed as some people think."

Social workers say that some Spaniards work in call centres for wages between €400 to 500 per month, while many are employed in small businesses, especially in the construction sector — one of those most affected by the economic crisis in Spain.

"Many work informally and regularly travel to Spain to receive unemployment benefits and to avoid being illegal" in Morocco, where the law restricts a tourist's stay to three months, says a young Spanish intern with a local NGO.

The Moroccan interior ministry, in an attempt to keep a tighter rein on the process, has urged Spanish newcomers to comply with all the required formalities.