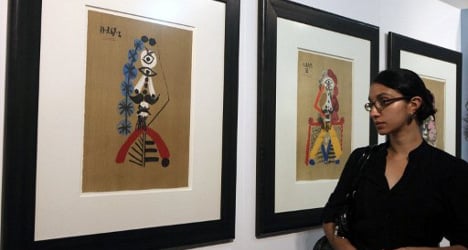 A woman studies a lithograph of Spanish artist Pablo Picasso made by Marcel Salinas under the supervision of the artist. File photo: Mayela Lopez/AFP

Catherine Hutin-Blay, daughter of Picasso's second wife Jacqueline Picasso, says as many as 407 works by the artist have been taken.

Among the works are drawings, lithographs and catalogues created by the artist originally from Malaga in southern Spain.

In an article published in French newspaper Le Parisien, Hutin-Blay said the thefts first came to light in 2011.

The discovery came when the Paris-basis Picasso Administration — the body which adminsters the artist's rights — informed Hutin-Blay it had discovered some of Picasso's works on sale in a private gallery in the French capital.

These turned out to be pieces Picasso's stepdaughter had inherited from her own mother.

Hutin-Blay said she "wanted to find out if the works" were there in their "filing cabinets. And they weren't!

"That triggered everything off."

The investigation that followed revealed a "well organized plot" to make off with hundreds of works created by the multifaceted artist who spent most of adult life in France.

The thefts were probably carried out between 2005 and 2007, says Picasso's stepdaughter who lives in the castle bought by the artist in the town of Vauvenargues in the southern French region of Provence.

But the story doens't end there.

According to the French paper, a conman named Freddy Munchenbach carried out "unspecified work" at Baltazart-Eon's home before doing the same for Picasso's stepdaughter.

He is now suspected of lifting over 600 works from the homes of both women.

This include works not just by Picasso, but also by fellow Spaniard Joan Miró, the Russian Kandinksy and the Swiss sculptor Alberto Giacometti.

Munchenbach allegedly passed the artwork on to Toni Celano, a lithographer arrested in Italy in January, according to the French newspaper.

He may have then resold that art to the Parisian gallery Belle et Belle.

One of Munchenbac'hs friends has also been implicated in the thefts. That man framed and exhibited original workds by artiets including Miró in his home.

In total the value of all the works stolen from the two women could be as high as €2 million ($2.6 million).

"I'm still not on top of everything," Hutin-Blay told Le Parisien.

"The art theft squad are charming. They know a lot about art.

"I'm lucky that I photographed everything beforehand." 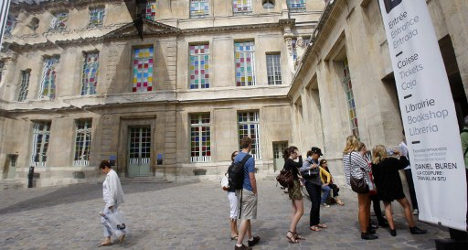 Visitors enter the Musée Picasso, in Paris, in August 2009 before the institution closed for renovations. File photo: Patrick Kovarik/AFP

The final bill for the refurbishment of the 17th-century baroque mansion in Paris's historic Marais quarter now stands at €52 million ($71 million), or €22 million more than the original budget due to changes in the scope of the work.

The museum is scheduled to open to the public again in June, president of the gallery Anne Baldassari told news agency AFP, adding that a more than doubling of the space available would allow curators to really "do justice to the collection".

Although the museum has around 5,000 paintings drawings, sculptures, ceramics, photographs and documents, previously only a fraction could be displayed at any one time due to the limited space available.

The renovations will boost the exhibition space to 40,000 square feet (3,800 square metres).

There will also be a corresponding rise in the number of visitors that can be admitted at once from 380 to 650, and annual admission figures are expected to jump from 450,000 to 850,000.

Baldassari said that if all went to plan most of the works would be brought out of storage at the end of April and arranged for display during May. The museum closed in August 2009.

"It's been a revolution," she said.

The museum will in future hold one major exhibition each year. The first in mid-2015 in collaboration with New York's Museum of Modern Art will take Picasso's sculpture as its theme.

The Paris museum opened for the first time in 1985 with most of exhibits left to the French state on Picasso's death in 1973. Others were donated by his family including his widow Jacqueline.

PARTNER CONTENT
‘I’m no longer afraid of failure’: the European MBA to help you conquer your fears

PARTNER CONTENT
VIDEO: My Parisian life: working in ‘the heart of the luxury industry’
Url copied to clipboard!