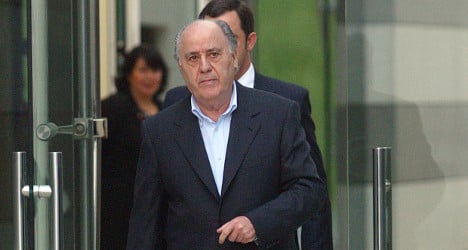 The 77-year-old Spaniard, who heads up the Galicia-based Inditex group, now has €39.62 billion ($51.6 million) to his name, while furniture mogul Kamprad has €35.98 billion stashed away for a rainy day, according to Bilan.

The cashed-up pair are ranked ahead of French tycoon Bernard Arnault, major shareholder in LVMH Möet Hennessy (€24.05 billion) and Liliane Bettencourt, daughter of the founder of L’Oréal (€23 billion).

In related news, Inditex was found to be the number one choice of potential employer for Spanish business students in a study run by Universum and People Matters.

These business students were looking for professional development opportunities and a good work–life balance, the Spain’s Ideal Employers 2013 survey found.

Other Spanish companies to rank highly for this group of students were banks Grupo Santander and BBVA, the hotel chain NH Hotels, and the retailer El Corte Inglés.

For engineering and IT students, Google, Apple and Microsoft were at the top of the table.

But Spanish power giants Iberdrola and Repsol were both among the top ten most highly-rated employers for this second group of students, as were the builders Dragados and Acciona.

The survey looked at the company preferences of over 13,000 students in 32 Spanish universities.