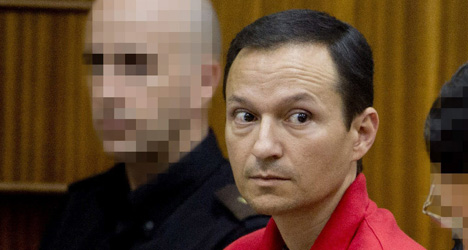 Bréton was ordered to stop staring at prosecution witnesses after they complained of feeling intimidated. Photo: Rafa Alcaide/Pool/AFP

Bretón, born in Córdoba in 1973, is an unemployed former army driver currently on trial for the murder his own children.

He is accused of killing them with sleeping pills then burning their bodies in a bonfire that he had converted into a high-temperature 'kiln' oven to destroy the evidence.

Why is he the Spanish face of the week?

Bretón was arrested 10 days after he reported the children missing on October 8th, 2011 and hasn't been out of jail – or the headlines – ever since.

This week, however, could be the apex of his public visibility.

He faces up to 40 years in prison if the jury finds him guilty.

Why does the case have such a high profile?

There has been a frenzy of media interest around the case since day one and a series of twists and turns have gripped the public's attention.

Bretón had custody of his children Ruth, aged six, and José, aged two, for the weekend.

Their mother had announced 23 days earlier that she was separating from him and wanted a divorce.

Bretón told police that he lost the children in a park.

But the police immediately felt that Bretón's demeanour was unusually cold and calm for someone whose children had just disappeared.

They also felt that there were inconsistencies in his story and he was arrested as a suspect.

Since then every aspect of his past and personality have been pored over on a daily basis by columnists, bloggers, experts and TV chat-show circuit polemicists.

His unusual physical appearance – short and slight with an intense, piercing stare – has added a compelling visual element to the drama.

Even the prosecutor was eventually moved to warn the jury against being influenced by the public hysteria and media sensationalism surrounding the case when the trial began in June this year.

Why has it taken nearly two years to get to this point?

Burnt remains were found on a property belonging to Bretón's parents but initial forensic evidence suggested that they were of animal origin, not human.

This slowed proceedings to a crawl for almost 11 months until further examinations determined that the teeth and bones were indeed human and belonged to a child aged about six, and a child aged between two and three.

The extremely high temperature of the oven destroyed all DNA evidence.

Bretón has denied all charges since being arrested and told officers, "You have nothing on me."

His defence lawyer has questioned the evidence and suggested his client may have drugged his children but then handed them over to someone else "because he wanted to hurt his wife".

During the trial the press has reported on family drama – Bretón's parents took the stand but refused to speak – and the testimony of over 100 people including forensic experts, psychologists, prison cellmates and police officers.

There have also been anguished appearances by Ruth Ortíz, the children's mother who filed a private prosecution that has run parallel to the public one.

She once described Bretón in a letter as "jealous (pathologically so), envious, obsessive, sexist, intolerant, not at all understanding".

"He is not affectionate," the letter went on, "he is not thoughtful, he does not make nice gestures toward others, he clearly perceives other people's weaknesses and shortcomings and highlights them."

Bretón was accused of intimidating witnesses at one point in the trial by staring at them.

He was eventually ordered by the judge to look away.

Reporters have seized upon psychologists reports describing Bretón as "highly intelligent" – he has an IQ of 121 – and as showing "signs of being excessively manipulative" and "exceptionally clear minded".

"Outside I'm a nobody, but at home I'm the boss," he told police.

At one point he claimed he was on hunger strike – just after buying a packet of chocolate biscuits.

Bretón has at times been on suicide watch because of fears he might repeat an attempt he made on his life many years ago.

The jury is expected to return its verdict in the case this week.