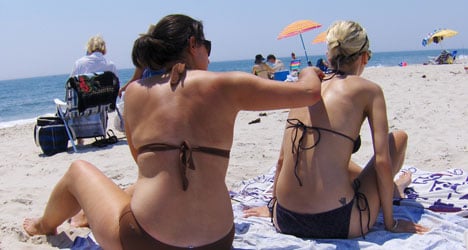 A new study by Spain's National Research Council (CSIC), shows that sun creams and lotions advertised as water resistant sometimes wash off in the sea.

That means a significant amount of their chemical components actually end up in the water.

Once there, they pose a significant risk to the ecosystem in popular tourist areas, said Catalan daily La Vanguardia, citing the study published in the scientific journal PLoS ONE.

Check out The Local List of Spain's best beaches.

Researchers carried out their work in the waters around the Balearic island of Majorca and detected chemical compounds from sunscreen in the surface 'microlayer' of the area's seawater.

"Sunscreens may have a significant environmental impact in areas of intense tourist activity," said Antonio Tovar, CSIC researcher at the Mediterranean Institute for Advanced Studies.

The scientist explained that the highest concentrations of the chemicals are found between 2pm and 6pm, a few hours after most swimmers have been in the water.

The pollution occurs when these substances accumulate.

During this peak period, the level of the chemicals can be between 60 percent and 90 percent higher than ​​late at night and early in the morning.

"These experiments show that some of these products have toxic effects on marine phytoplankton, crustaceans, algae and fish," said Tovar.

Analysis of over a dozen commercial sunscreens showed they don't just release chemical compounds, but also other elements such as nitrogen, phosphorus and silicon.

These compounds can act as nutrients and stimulate the growth of algal communities.

Tovar noted: "This effect, although it does not seem harmful in itself, can alter ecosystem dynamics."