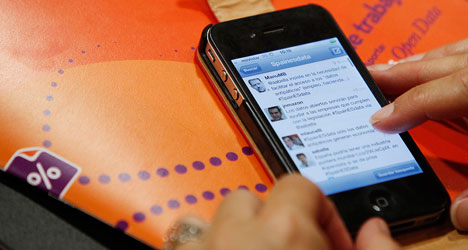 Rates of Smartphone use in Spain are higher than in many other European countries. Photo: datos.gob.es/Flickr

The annual report on internet use in society from Spain's Ministry for Industry and the National Information Society (ONTSI) has highlighted contrasts in Spanish attitudes to online activities.

A full 27 percent of Spaniards have never used the internet and only 51 percent jump online regularly, according to report details published on news site La Información.

The country is, however, addicted to mobile phones: 94 percent of Spanish homes have at least one such device.

Sixty-six percent of mobile phone users have a smartphone such as an iPhone or an Android device, putting Spain ahead of countries including Germany, France, Italy and the UK.

The figure explains Spain's status as Europe's champion of chat.

Some 43 percent of people in Spain use social media platforms such as Facebook, Twitter and Google+ as well as chat-only mobile services like WhatsApp, compared with 37 percent across the EU.

By contrast, Spaniards have been reluctant to embrace e-commerce — only 31 percent shop online against the European average of 45 percent.

But the country leads the EU in its enthusiasm for online health services.

A total of 22 percent of Spaniards book appointments with their doctor via the internet, three times more than their European neighbours.

"We are leaders in availability of online public services," said Pedro Martín Jurado, president of ONTSI.

"In eGovernment, we are in an enviable position."

He added: "The European Commission says that 98 percent of (Spanish) government services are available online, compared with 74 percent across the European Union. "