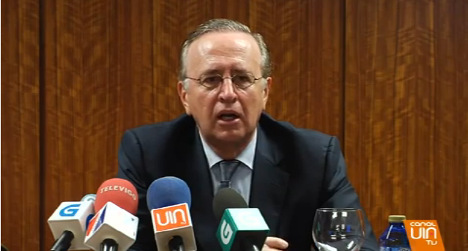 Pescanova president Manuel Fernandez de Sousa, who denies wrongdoing in one of the largest financial scandals of Spanish corporate history, said that despite possible errors, he acted in good faith.

Highlights of the findings by accountant KPMG's review of Spain's biggest fisheries group, which filed for bankruptcy in April and is being investigated by the courts, were released late on Wednesday.

"In the last financial periods, practices were designed and set up whose object was to present a group financial debt smaller than the reality and, as a consequence, results that were larger than those actually generated," KPMG said according to a statement from Pescanova to the stock market regulator.

Pescanova obtained credits for invented deals in which no goods were actually involved and used corporate structures designed to generate "fictitious" earnings, the KPMG report said.

The manoeuvres "may be considered irregular from an accounting and financial viewpoint," it said.

In fact, Pescanova by the end of last year had a net debt of €3.28 billion, more than double the level declared, and a net value of a negative €927 million, it said.

The fishy accounting moves were no slip-up, the report said.

"They were the result of conscious planning carried out over several years by the Pescanova management," it said.

"There is well-founded evidence that certain people in top management instructed, executed, carried out or knew, to a greater or lesser extent, of the said practices."

Accounting firm Deloitte, which is acting as Pescanova's administrator, called a meeting of the Pescanova board for a briefing, a source close to the matter said.

The Spanish courts opened an investigation on May 23rd into several top managers of Pescanova including its president on suspicion of falsifying accounts and insider trading.

In a statement sent to AFP on Thursday, Fernandez de Sousa said he had submitted a statement in his defence with the court on Tuesday.

"This declaration says that among the reasons that led Pescanova into its current situation was the tight restriction of credit that coincided with an ambitious expansion plan," he said in the statement.

"This situation may have led the business and its president to adopt mistaken decisions from the business, accounting and financial point of view," Fernandez de Sousa said.

The decisions were taken with the knowledge of Pescanova's banks and in the belief that credit would flow again and that Pescanova's investments would generate returns in the short term, he added.

"All the decisions were taken with the sole aim of maintaining financing in the company, guaranteeing 11,000 jobs and continuing to be a viable company and a world leader in the industry."

Pescanova, an emblematic company of the coastal area of the northwestern region of Galicia, declared bankruptcy on April 25th and its management was placed under the authority of the stock market regulator.

The group, whose troubles have led it to be popularly known as Spain's Enron, has not published its 2012 results, for which an audit has yet to be completed.

With 160 branches around the world and a fleet of more than 100 vessels, Pescanova sells its fish products under 16 brands and employs about 10,000 people.