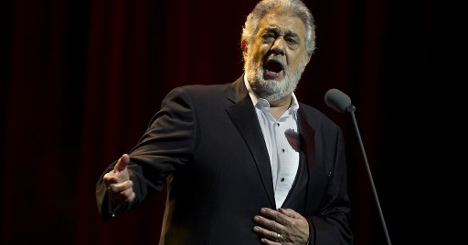 The 72-year-old opera star was admitted Monday to the hospital in the Spanish capital, his Los Angeles-based representative Nancy Seltzer said in a statement.

"He is being successfully treated for a pulmonary embolism," she said.

The embolism was the result of deep vein thrombosis, the agent said, a condition in which a clot forms in a deep vein, often in a leg.

Domingo, known to popular music audiences for his "Three Tenors" performances with Jose Carreras and the late Luciano Pavarotti, was expected to make a full recovery, Seltzer said.

"Per his doctor's instructions, he will be forced to rest for three-four weeks. His exact return to his performing engagements remains subject to how fast he can heal and regain his characteristic strength," she added.

The opera star had to cancel five performances in Daniel Catan's "Il Postino" due to begin at the Teatro Real in Madrid on Wednesday, July 17th, as well as a concert he was to conduct in Madrid's Plaza Mayor square on July 21st, the agent said.

"The Teatro Real wishes to express its enormous regret for the great Madrid tenor's illness and to send him its best wishes for a quick recovery," the Spanish theatre said in a separate statement.

Born in Madrid, Domingo moved to Mexico as a child with his parents, who ran a company that performed zarzuela, the traditional Spanish operetta.

The tenor made his operatic debut in a leading role as Alfredo in Verdi's "La Traviata" in Monterrey, Mexico nearly five decades ago.

The Grammy-winner's repertoire encompasses 134 stage roles — a number unmatched by any other celebrated tenor in history.