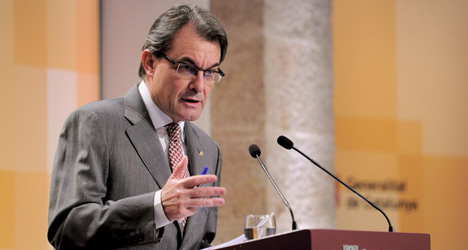 Catalonia's public services are paid for "thanks to the efforts of Catalan citizens" said the President of the region Artur Mas. Photo: Josep Lago/AFP

Mas spoke out during an official visit to Rio de Janeiro, Brazil, after hearing about the comments made by Spanish Finance Minister Cristóbal Montoro.

Montoro had asserted that Catalonia only financed its public services thanks to the Spanish government, according to La Vanguardia newspaper.

The Catalan President replied: "The Finance Minister, who is an educated man, must know that if the Catalan government finances its public services, then it is thanks to the efforts that Catalan citizens make every day, producing and paying taxes."

He added: "Of all those taxes, an important part — as much as  €16 billion a year —  that Catalans pay out goes and never comes back."

"So… who the hell is financing whom?"

"Catalonia finances the Spanish state from many points of view," he said.

Mas added that Montoro should therefore "not boast of what he does not have".

The spat is part of a long-running dispute between Spain's central government and the leader of the region of Catalonia.

Mas is pushing for a non-binding 'referendum', or consultation, in Catalonia which would see the region deciding whether it should become independent from the rest of the country — a move rejected by Madrid.

A study published on Wednesday by influential Spanish research institute CIS showed that 82 percent of Catalans reject the Spanish Government's position on Catalonia.

The study also found the 40 percent of Catalans believe Spain's autonomous regions should be allowed to decide whether to become independent.