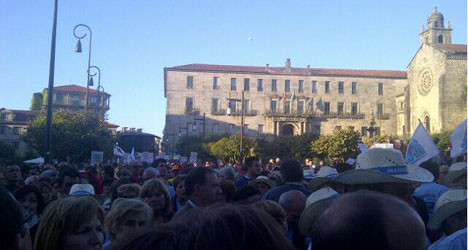 Protests have been ongoing in Pontevedra, Galicia, since the preference shares scandal broke. Photo: Twitter

Hundreds of thousands of Spanish bank customers who were sold high-risk"'preference" shares in savings banks, including Nova Caixa Galicia, took heavy losses when the sector was reformed as a condition of the EU's €100 billion ($128 billion) rescue deal in 2012.

Bank staff were said to have been pressured by bosses to persuade customers to convert their life savings into the new investment products without explaining the risks.

Many of those who lost their savings have been protesting in Pontevedra, in the north of Spain, for a year and a half since the scandal broke.

They originally occupied the council building before being evicted in June and moving their protest outside.

Organizers are said by Spanish daily El País to have started to receive 'a rain of fines' in late April for offences including "causing a serious disturbance on public roads" after a police car chauffeuring local Popular Party (PP) councillors was unable to get past the protest group.

Since then the "rain of fines" has become 'an avalanche' as ordinary protestors have been hit with sanctions for a range of minor offences.

An 81-year-old woman with serious mobility problems was fined for "coercion" while nine others received fines of €100 and three penalty points on their driving licence for "not wearing properly fastened seatbelts".

Some were also slapped with €40 fines for honking their car horns.

One organizer, Xulio Vicente, has been fined a total of €2,000 but said that the protest area was fenced off and not blocking traffic.

A number of identical fines for "putting a table and three chairs on the pavement" were also issued.

Three people were fined for insulting police officers when the protest was forced to relocate outside the council building.

The fines were met with anger and disbelief by the protestors.

"Where were you when they were stealing our lives?" they shouted at council members.

Some protestors blamed the town's PP mayor Jesús Fernández Portela for the crackdown but he has denied being behind it.

"I know nothing of these fines, I was in the office," he said.

The mayor admitted that traffic had not been blocked and added, "I don't know if it (the obstruction) is punishable."

"I don't think the fines would have been issued for no reason."