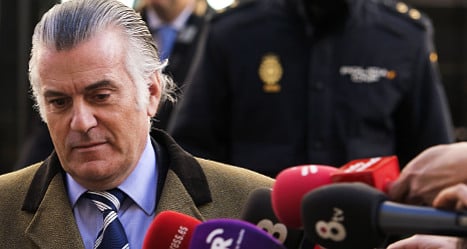 The ex-treasurer of Spain's ruling Popular Party is currently in prison without bail on charges including money laundering and forgery. File photo: Pierre-Philippe Marcou/AFP

The newspaper said the records showed Spain's current Prime Minister Mariano Rajoy received under-the-table payments in 1997, 1998 and 1999 when he was a minister of the PP government of José María Aznar.

But the PP on Tuesday once again denied that the accounts — originally published by El País newspaper in January — had anything to do with organization.

Without mentioning Bárcenas by name, the party said all payments by the party to its officials and staff had "conformed with the law" and that the "corresponding tax" obligations had been met.

In its statement, the PP said it was willing to cooperate with the authorities to bring "investigations to an end as quickly as possible".

"The Popular Party reiterates that it does not know of the notes nor their content, and it does not in any way recognise them as the accounts of this political organization," it said in its statement.

The party's ex-treasurer Bárcenas is currently being held in prison without jail for his role in a separate corruption case, popularly known as Caso Gürtel.

In that case, the Bárcenas is charged with money laundering and tax fraud among other crimes as part of an investigation into a group of Spanish businessmen who staged PP events in exchange for kickbacks.

Bárcenas, the treasurer of the PP from 1990 to 2009, had failed to adequately explain the around €47 million ($61.5 million) he held in Swiss bank accounts, said presiding High Court judge Pablo Ruz in his ruling which saw the official sent to prison.

On Sunday, El Mundo newspaper published an published a conversation between that paper's director, Pedro J. Ramírez, and Barcénas.

In that interview — which took place before the former top official was jailed — Bárcenas stated that the PP had been funded illegally for at least two decades.

The top official told the newspaper's director about the methods, means, and extent to which the PP had been illegally funded for over the past twenty years.

That funding took the form of donations from construction magnates and other business people, Bárcenas alleged.

In the wake of that interview, Bárcenas' lawyers resigned, citing "professional differences" as the reason.