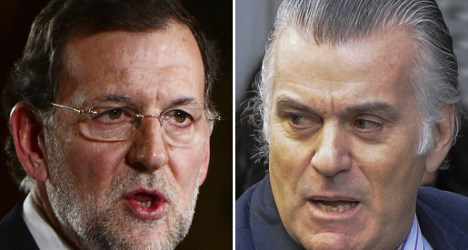 The call for Rajoy's resignation came after the corruption scandal implicating Spain's Prime Minister Mariano Rajoy reignited on Tuesday with the publication of an original handwritten account ledger purportedly showing illegal payments to him while he was a minister.

The document published by El Mundo newspaper fanned a scandal that has outraged Spaniards suffering in a recession and had already sparked calls for Rajoy to resign earlier this year.

His ruling Popular Party hotly repeated its denial of any illegal payments to its members, while the opposition Socialists renewed their call for Rajoy step down.

El Mundo published a page from what it said were original account ledgers showing payments from a secret slush fund to Rajoy and other party members in the late 1990s.

Coming six months after centre-left daily El Pais published supposed photocopies of the accounts, El Mundo's report said that the original copy challenged claims by the party that the accounts had been fabricated.

It said the ledgers were compiled in part by the party's former treasurer Luis Barcenas, who is now behind bars facing corruption charges.

The party has distanced itself from Barcenas and has said it has no fear of possible revelations by him from his prison cell.

El Mundo's editor Pedro J. Ramirez handed the original account document to the courts on Monday, the newspaper said, without revealing the source of the files.

The excerpt purportedly showed extra payments to party officials including Rajoy when he was a minister under premier Jose Maria Aznar in 1997, 1998 and 1999.

The paper called the original documents a "smoking gun" in the scandal. It said the transactions flouted a 1995 law barring such supplementary payments to members of the government.

The party insisted "it does not know of the notes nor their content, and it does not in any way recognise them as the accounts of this political organization," in a statement.

All payments to party officials were properly declared, the party added.

"The PP denies making payments to people other than those included in their monthly salaries with the corresponding deductions for tax and social security."

The Socialists, some of whose regional officials have been hit by corruption allegations over recent months, reiterated their call for Rajoy to resign, its deputy leader Elena Valenciano said after a party meeting on Tuesday.

She said that if Rajoy was proved to have received the payments, he was guilty of "a lie".

"As long as there is a shadow over the prime minister's honour, the heart of the whole democratic system will be affected and Spain's standing in the world will suffer," she said.

Barcenas, the former treasurer, was remanded in custody on June 27th as part of a far-reaching probe into political fraud and corruption.

Judge Pablo Ruz ordered him to be detained over allegations including money laundering and tax fraud, saying the move was aimed at preventing him from fleeing and to preserve evidence.

Barcenas is being investigated over tens of millions of euros he allegedly stashed in Swiss bank accounts.

Rajoy has denied receiving undisclosed payments. He resisted calls to resign after the revelations published by El Pais in January, which fuelled angry street protests.