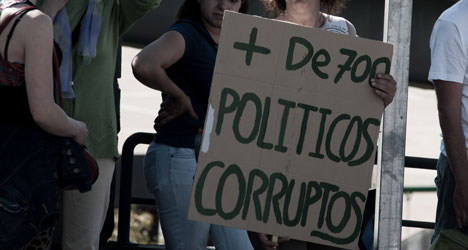 Protestors have highlighted a lack of faith in the integrity of Spain's major institutions. File photo: R.Garcia/Flickr

The study also shows 67 percent of people believe Spain's parliament is corrupt while for the private sector the figure is 43 percent.

TI's Global Corruption Barometer 2013 surveyed more than 114,000 respondents in 107 countries about their direct experiences with bribery and their views on corruption.

The report notes that on a scale of 1 to 5 – where 1 means 'not at all corrupt' and 5 means 'extremely corrupt' – Spaniards' give their country a score of 4.1 percent.

The international average is 4.1.

In answer to the question, "To what extent is this country’s government run by a few big interests looking out for themselves?" the percentage of respondents who answered ‘a large extent’ or ‘entirely’ in Spain was 66 per cent.

The survey also found that 66 per cent of Spaniards believe that corruption has 'increased' or 'increased a lot' over the last two years.

That's compared with 53 per cent of people internationally.

TI's Alejandro Salas told reporters that the Spanish were "conscious" of a great deal of corruption "at the highest levels".

National daily El Mundo reported Salas as saying, "In Spain, with high unemployment and the crisis, there is more talk of corruption".

"Before, this was not an issue because they (Spaniards) didn't connect their own personal problems with money that was being wasted."

A below-average six-out-of-ten Spanish respondents felt that ordinary people could do something about corruption.

While Spanish people may have a low opinion of the integrity of their institutions, only 2% reported having paid a bribe, a figure bettered only by Australia, Denmark, Finland and Japan.

The TI report concluded that there is a serious international crisis of confidence in politics and in the ability of institutions to bring the corrupt to justice.

"When the scourge of corruption erodes these core institutions and basic services, too many people suffer."