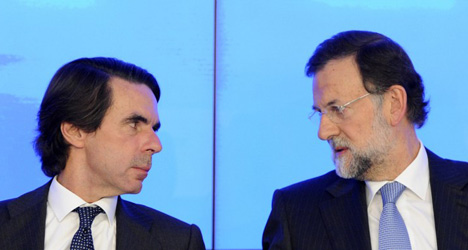 Former Prime Minister Aznar hit the headlines in June after hinting he would like to return to politics and demanding the current government cut taxes faster.

He outlined his ideas in a range of statements and interviews widely interpreted as attacks on the current Spanish PM.

But Rajoy hit back on Sunday at the annual conference of Spain's Foundation for Social Studies and Analysis (FAES), a PP-linked think tank of which Aznar is president.

After being greeted with a handshake and back-slap by Aznar, Rajoy went on the counter attack to defend his decisions as leader.

He said that the reforms of his government were "ambitious" and "true" and said that they should be judged at the end of his term in office, not now.

While acknowledging the alternative proposals that Aznar formally presented during the FAES conference "would be looked at by experts",  Rajoy made no explicit reference to lowering taxes.

"We know, we understand, and rightly so, that people want decisions to be made as quickly as possible but no one can say that my government has not undertaken enormously deep reforms," he added.

Quoting the triumphalist phrase that Aznar made famous during his term in office, Rajoy said: "We cannot say 'Spain is doing well' (España va bien) but 'Spain is doing better' and we are going in the right direction."