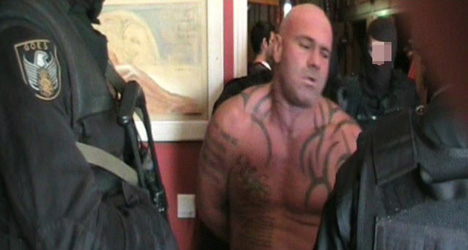 The fugitive eventually gave himself up after realizing that there was no way to escape. Photo: Spanish National Police

A statement from Spain's National Police reported that Mark Alan Lilley was seized on Saturday after a raid on an armoured room behind a camouflaged door.

He was holed up in there with a computer he used to monitor CCTV cameras.

Reports have Lilley living in the Alhaurín de la Torre area of Malaga under a false name.

He is also said to have changed his appearance through tattoos and weight-lifting.

The criminal, originally from Warrington in Cheshire, skipped bail in 2000 after being charged with conspiracy to supply cocaine, heroin, ecstasy, amphetamines, cannabis and cannabis resin, and for possession of a firearm.

He was convicted in his absence and sentenced to 24 years in jail.

Since then he has regularly featured in 'Most Wanted' lists published by British tabloid newspapers such as The Sun and crime prevention organizations including Crimestoppers UK.

When Spanish police traced Lilley's suspected location they called on GOES, a Special Security Task Force,  who raided the property.

Two men and two women were found but there was no trace of the suspect.

A thorough search of the villa uncovered a wardrobe with a false door in the main bedroom.

This revealed a security door leading to a 'panic room', a safe place used to take refuge in the case of home invasions.

Video of the arrest of Mark Alan Lilley

Police were unable to open the door but Lilley eventually surrendered after realizing that he had no possible means of escape.

It is believed that guard dogs kept in the garden had alerted Lilley that the raid was underway.

This caused him to bolt the room from where he could monitor proceedings via CCTV cameras.

Lilley was sentenced in Bolton Crown Court in April 2000 in England for offences stretching back to 1997.

He was considered to be the head of a drug trafficking organization.

Lilley's trial began in February 2000 but he disappeared after being released on bail.

PARTNER CONTENT
Have you tried these weird and wonderful British foods?