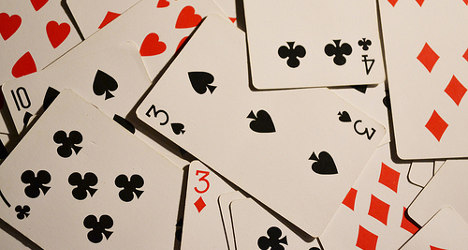 The study looks at Spanish perceptions of gaming and shows that households have trimmed their spending on games of chance.

"What's new in 2012 is that both the frequency and the amount of games played, as well as the sums being spent  are all down," says the report carried out by the Madrid's Charles III University (UC3M) together with the gaming studies institute CELEJ.

"The amount being spent is down in all households — even in affluent ones — but the effect is being seen most in lower middle class homes and among immigrants," José Antonio Gómez Yáñez, Professor of Political Science and Sociology at UC3M told Spanish science news agency SINC.

Households are now giving over 7.7 percent of their leisure budget to gambling, down from 9.4 percent, the study shows.

The authors also say that spend is almost zero in homes with economic difficulties, with just a small amount going over to public games like the lottery.

"With the crisis, what goes up is the demand for luck," said Gómez Yáñez.

This is especially true for those games "where people, in exchange for a small sum of money" can "with a stroke of fortune" get "financial relief" or see an end to their economic woes.

The professor commented that some 85 percent of Spaniards particapted in some form of gaming.

But he said Spaniards' relationship with this gaming was very rational and cold, and largely limited to social uses.

The study into gambling also found that online gamblers were now spending an average of €37 ($47) a month.

Some 4.42 percent of the population between the ages of 18 and 75 years had gambed online in the previous three months.

This figure is substantially higher than that reported by Spain's Gaming Authority, the report's authors said.

"This definitely stems from the fact that many players appear to be using unauthorized websites," said José Ignacio Cases, Emeritus Professor at UC3M.

In 2012, the Spanish Goverment regulated these gaming sites, but Cases said unregulated sites continued to operate.

The study also reveals that almost one in four online gamblers in Spain is younger than 45 and and that just under two thirds (64.8 percent) are male.

More than half of this group favour sports betting and online poker.

Public operators including SELEA and ONCE, meanwhile, are claiming an ever larger share of the online gaming market.

A UC3M report released in April 2013 stated that one out of every four euros spent on gaming in Spain went to the state.

The report said the people between the ages of 18 to 75 in Spain spent an average of €758 on gaming every year.

That report also stated that Spain's gaming industry employs almost 170,000 people a year and makes up 2.6 percent of the country's gross domestic product.