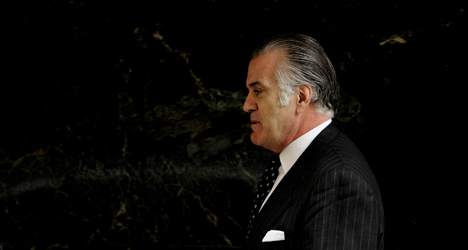 The former Popular Pary treasurer is being investigated for his possible role a number of corruption scandals. Photo: Pedro Armestre/AFP

The announcement comes a day after Spanish daily El Mundo published a conversation between that paper's director, Pedro J. Ramírez, and Barcénas.

In that interview — which took place before the former top official was jailed — Bárcenas stated that the PP had been funded illegally for at least two decades.

The top official told the newspaper's director about the methods, means, and extent to which the PP had been illegally funded for over the past twenty years.

That funding took the form of donations from construction magnates and other business people, Bárcenas alleged.

Now, in the wake of Sunday's article, the lawyers acting for the ex-treasurer, Alfonso Trallero and Miguel Bajo, have presented their written resignations.

These were handed over to the National Court on Monday, national broadcaster RTVE reported, also on Monday.

Before filing their resignation, Trallero visited Bárcenas in Soto del Real prison, where the former treasurer has now been for 12 days, to inform him in person.

As a final favour to his client, the lawyer requested that Bárcenas's bail, set at €43.2 million, be overturned because of a lack of evidence of wrongdoing.

Bárcenas is implicated in the infamous Gurtel case and a number of other corruption scandals.

The ex-treasurer handled the PP's finances between 1991 and 2010 and is being investigated for crimes including tax fraud, bribery of public officials, money laundering, and document forgery.

It was recently revealed that he had up to €47 million secretly saved in Swiss bank accounts at one time.