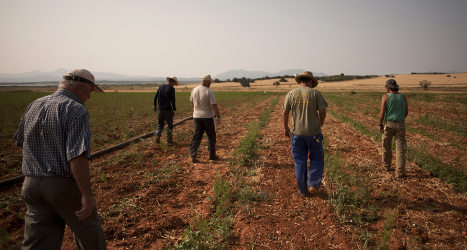 Workers walk in a social orchard in Fuente de Piedra, near Malaga. The Alameda City Council has launched a project on social orchards. Photo: Jorge Guerrero/AFP

Now his tools are different: a wooden-shafted hoe and his hands, white-gloved for unearthing garlic bulbs and picking weeds from asparagus in the red earth around his home town of Alameda.

"I had my own company for 35 years, then the crisis took it all away. So I went to work in the fields," says Antonio, a tanned man of 58 with a grey moustache.

"The work is very different — out in the open air, with the mosquitoes. It is very tough work, not like in a factory."

Ruined, like many Spaniards, by the collapse of the decade-long building boom in 2008, Antonio saw his business fail in 2011. Now he has turned for salvation to what has traditionally been this region's biggest asset — the land.

Alameda's town hall this year launched a "social allotment", investing €60,000 ($77,000) from its budget in leasing 16 hectares and paying unemployed people to cultivate garlic, asparagus and melons that will then be sold.

In the summer heat the plots are now yielding their crops, along with several weeks of paid work for locals, allocated to the job by drawing lots at the town hall.

The surrounding province of Malaga, on the Costa del Sol, has one of the highest unemployment rates in Spain — nearly 37 percent, high above the national rate of 27 percent.

"In the circumstances, the town hall has few resources to create jobs. But we can't just spend four years saying, 'I can't help you,'" says Alameda's mayor, Juan Lorenzo Pineda, of the left-wing IU party.

"So we are trying to make the most of the resources we have, and what we have above all is farmland."

The initiative this year has created a few weeks' sowing and harvesting work for 35 people — a small project which he hopes will grow over the years.

"Before the boom, farming was a major resource in our district but it was abandoned to some extent because people bet heavily on construction. Now construction has collapsed, we have to recover that resource."

As many jobless Spaniards have returned to the countryside, towns like Alameda have no choice but to dig for work in the earth.

"Spain is very much a farming country, so the circumstances have led people to return to their country villages," says Sandalio Gomez, an expert on labour relations at IESE business school in Madrid.

"People have used the money from being laid off by their companies and even their unemployment benefits to start little allotments and revive their relationship with farming."

Similar initiatives by town halls such as Alameda's, meanwhile, "are a good idea that help people get back into farming," he said.

"These projects are going gradually from strength to strength. It is a good solution and should be encouraged so that it happens more."

For a town like Alameda — population 5,500 — the initiative is a lifeline since the mainstream agricultural sector has woes of its own, professional farmers say.

"A lot of people have come back to their villages, but this does not mean the farming sector is creating jobs," says Lorenzo Ramos, secretary general of the Union of Small Farmers.

"Farmers cannot balance the books because of the low prices they get for the produce. Subsidies are not making up for the loss of income."

The solution of small-scale social allotments, "in this difficult situation we are in, offers an alternative," he adds. "It could be a way for a lot of people to make a living."

Antonio is paid around €45 a day for his labour — limited for now to two weeks of summer harvesting work, after which he will apply again to the town hall's labour lottery.

It's a small boost to his usual income of €800 a month in unemployment benefits, but better than nothing.

"It gives you hope, to work and not be idle," he says. "It's very important psychologically. It encourages you to keep fighting."