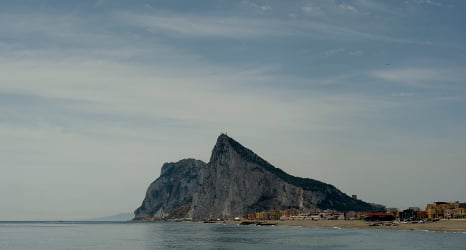 Tensions between Spain and the UK have been high since recent allegations that a Spanish police fired at a jet skier in the contested waters of Gibraltar. Photo: Jorge Guerrero/AFP

Four Spanish air force Matador jets entered Gibraltar's airspace from the northwest on Wednesday while apparently on their way to an aircraft carrier that was about 12 nautical miles southeast of the territory, the government of Gibraltar said in a statement.

"At no time did the aircraft make contact with Gibraltar's air-traffic control and the Spanish air traffic authorities in Seville gave no warning of the aircrafts' approach," it said.

Air traffic controllers in Seville delayed the departure from Gibraltar of a British Airways flight to London for 12 minutes until it was safe for it to take off, the statement added.

The government of Gibraltar has called on Britain "to take up the matter of this military incursion into the airspace of Gibraltar at the highest diplomatic and military levels."

Last week British Prime Minister David Cameron protested to his Spanish counterpart Mariano Rajoy at a meeting of European Union leaders in Brussels over allegations that Spanish police fired shots at a jet ski in the contested waters around Gibraltar.

"I think this is a totally unacceptable episode and I made that clear. I think it is very important that people on Gibraltar know that we support them, we support their sovereignty. We need to find out more about what happened but from what I have heard…it is not acceptable," he told a news conference at the EU leaders' meeting, according a statement from the government of Gibraltar.

Madrid has flatly denied accusations that Spanish military-linked Guardia Civil police fired shots while chasing a jet ski on June 23 in waters off Gibraltar and it has criticized Britain for giving credence to rumours.

A Spanish foreign office spokesman said an incident involving a jet ski did take place but that no shots were fired.

Britain has held Gibraltar since 1713 but Spain wants it returned and refuses to recognize British sovereignty over the waters off the land known as the Rock.

POLITICS
What is the latest on Gibraltar’s Brexit status? PARTNER CONTENT
How to enjoy a British Christmas – the way it should be
Url copied to clipboard!