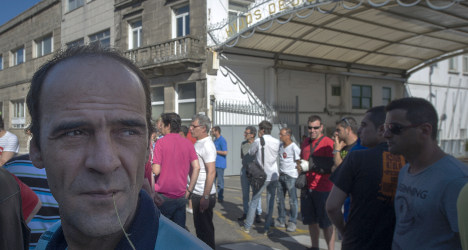 Sink or swim: Brussels will decide by July 17th if the roughly €3 billion ($4.0 billion) Spanish shipbuilders received from 2005 to 2011 has to be paid back. Photo: Miguel Riopa/AFP

About 1,000 shipyard workers and their supporters marched from the shipyard in Vigo Bay to the historic centre of the northern industrial city.

"Listen Europe the naval sector is struggling," they chanted. Many held their hardhats in their hands.

Protesters threw bottles of paint at the windows of the office of the European Fisheries Agency in the port city and burned two garbage bins.

Brussels will decide by July 17th if the roughly €3 billion ($4 billion) in state aid which Spanish shipbuilders received between 2005 and 2011 were unauthorized and if they will have to pay the money back.

The European Union's commissioner for competition, Joaquin Almunia, has warned that EU rules for fairness in state aid implied it may have to be paid back.

But Almunia, who is Spanish, has argued that those who should be made to pay are the investors who funded projects which also received state aid and the shipping companies that bought the resulting vessels.

"We hope that there will be no need to reimburse, because if we have to reimburse, the shipyards will close," Manuel Simon, the spokesman for the metalworking section of the Vigo branch of the CIG union, told news agency AFP.

Shipbuilders say the sector has already suffered because of Spain's economic downturn and the end to state aid in 2011.

Six Spanish shipyards have shut down in recent years and the sector has lost contracts for 50 ships due to concerns over the commission's enquiries into the state aid, according to the PYMAR association which represents Spain's 19 shipbuilders.

"Three years ago 12,000 people worked in the shipyards, today barely 900," said Ramon Sarniento, the head of the naval sector of the CCOO union who works at the Barreras shipyard in Vigo, just like his father and grandfather had done.

Unions have called for a day of protest and strikes on July 11th when Almunia will meet with representatives of Spanish shipbuilders in Brussels.