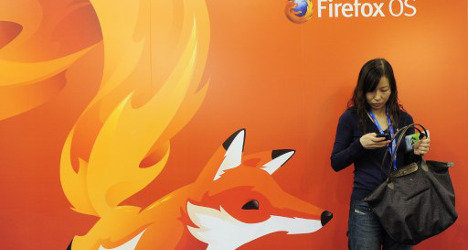 A woman looks at her phone as she stands in front of a poster of Mozilla Firefox at February's Mobile World Congress in Barcelona. Photo: Josep Lago/AFP

The new phone, ZTE Open, went on sale Tuesday at €69 ($90) and runs on a Firefox system developed by the Mozilla Foundation, which campaigns for open development of the online world.

Mozilla, a non-profit community of developers and users, enters as a minnow into a market dominated by the mighty duopoly of Apple and Google whose iOS and Android programmes are in 90 percent of smartphones.

Mozilla joined with Spain's Telefonica and Chinese handset maker ZTE to launch the new handset, which uses the Internet as the platform for all its functions and applications.

"We believe that smartphones need to be more open and that the web is the platform for making this possible," Telefonica Espana chief executive Luis Miguel Gilperez said in a statement.

Telefonica said it planned to sell Firefox OS devices in other markets including Colombia and Venezuela in the "coming weeks".

Mozilla chief operating officer Jay Sullivan predicted the new phone would stimulate a "new wave of innovation for the web".

The ZTE Open has a 3.5-inch screen, 265 megabytes of RAM, a 3.2 megapixel camera and comes with a 4 gigabyte microSD memory card. It has messaging, email, calendar, FM radio, camera, Nokia mapping and the Firefox browser.

The first online reviews of the phone were mixed, though almost all admired the low price.

Online technology review site engadget.com said there was a "significant amount of lag" in the user interface when scrolling web pages or navigating applications. But a reviewer on pcworld.com said he noticed no lag in a short test.

Telefonica said the ZTE Open was the first of a series of Firefox OS devices to be launched this year, noting support by other manufacturers including Alcatel OneTouch, LG, Huawei and Sony.

Mozilla, which aims to take third place behind Android and iOS, announced its plans for Firefox OS at a mobile telephone fair in Barcelona in February last year.

Analysts say the two leaders will still dominate the market in 2013 although there could be room for a third player.

There are several operating systems vying for that number-three spot, however, including Microsoft's Windows Phone, Blackberry, Firefox and Samsung's open-source project Tizen.