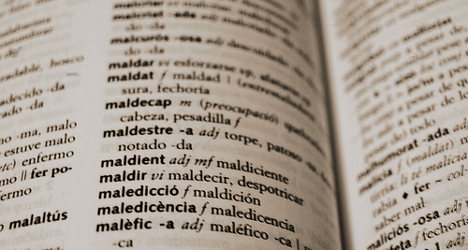 A Valencian—Castellano dictionary: the status of the Valencian language is disputed. File photo: Virginia Mendoza

The linguistic furore started when PP spokesman Jorge Bellver submitted a proposition to the Valencian Courts on June 13th.

He wanted Valencian recognized "in its own category as a language of the people of Valencia,  as spoken in most of the region of Valencia".

This tome currently defines Valencian as "a variety of Catalan, used in much of the ancient kingdom of Valencia, and commonly considered there to be a separate language".

In the proposition, the PP argued that the roots of Valencian stretch back to the 6th century BC, according to Spanish daily El Mundo.

But now the the Valencian Academy of Language (AVL) has slammed the proposal.

Experts from the institution conceded that Valencian, "as with any other language", could be traced back to earlier languages.

The institution said, however, that "Valencian itself came into existence in the 13th century when it was brought here by  Catalan and Aragonese settlers".

It said that this was "shown by history, medieval documents, onomastics (the study of names), and philology (the study of languages) which show its Latin origins".

"Valencians, Catalans, people of the Balearic islands and other inhabitants of territories of the former Crown of Aragon all share the same language."

The AVL also reminded the PP that the party had, in 2005, unanimously supported their 'Report on the principles and criteria for the defence of the name and identity of Valencian' and asked the Courts to pass a copy on to Bellver.

They added: "We are, however, available to Bellver and the other members of parliament, to provide any information they might require."

The language academy claims that the PP proposition violates Valencian law because it ignores the report in question and does not respect the linguistic authority of the Academy "which is binding for all public institutions in Valencia".

It also stressed "firmly" to all members of the Valencian parliament that they should "not use language as a political tool".

This is not the first time in recent history that political wrangling over language has caused controversy in Spain.

Education Minister José Ignacio Wert was criticized by some in Catalonia when he announced changes to Spain's language law that removed Catalan's status as the only working language in the region's state schools.

And in May, a PP law in Aragon officially re-named the Catalan spoken in the region as LAPAPYP (Lengua Aragonesa Propia de las Áreas Pirenaica Y Prepirinenca), or  'Aragon's own language of the Pyrenees and pre-Pyrenees'.

This was described by oppositions socialists as a "ridiculous insult to people's intelligence".