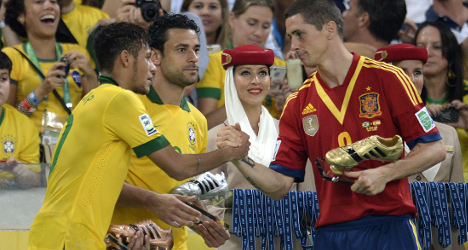 The team, also current European champions, were swept away by the more powerful Brazilians and must now learn the lessons of their defeat if they are to stop Brazil running away with the World Cup they will host in 2014, the Spanish press said.

"We will be back," vowed the front page headline in Spain's biggest sports daily Marca.

Brazil raced into a 1–0 lead after only two minutes through Fred's first of the night, then made it 2–0 just before half time with an unstoppable left-footer by Neymar. Two minutes after the restart Fred made it 3-0 with a low drive wide of keeper Iker Casillas' outstretched arm.

"Spain sink in the Maracana and make a date for Brazil in the 2014 World Cup," said Marca, over a photograph of Neymar celebrating his spectacular goal.

"Everything went wrong for Spain," the paper said, from an attempt to equalize when 1-0 down that was blocked on the line by Brazil's David Luiz, to a missed penalty by Sergio Ramos in the second half.

Piling on the pain for Spain, Gerard Pique was sent off halfway through the second half for a professional foul on Neymar.

"Brazil will be the favourites in the next World Cup," said the paper's football analyst Santiago Segurola.

"But it will be hard to improve on yesterday's level," he added.

Spain had come back from a Confederations Cup defeat to win the last World Cup, he warned, predicting that the return of Xabi Alonso to Spain will fix many of the side's problems.

Rival sports daily AS ran the same defiant front page headline: "We will be back."

Spain were made up of midfielder Andres Iniesta "and 10 others", said an opinion piece by AS's Alfredo Relano.

He criticized Spain's defence, bemoaned a lack of "miracles" from keeper Iker Casillas and added that the competition had not gone well for Xavi Hernandez.

Brazil's Neymar, who joins Barcelona from next season, emerged as a "world class figure", however, he said.

"We have a year to find out if this team has further to go or if it already needs a shake-up," Relano said, noting that a World Cup gives teams more time to prepare.

"It just remains to congratulate Brazil and start to prepare right now, calmly, for the World Cup within a year."

"Neymar is crowned," declared the front page of Mundo Deportivo.

"Brazil and a dazzling Neymar outplay Spain who were without their game," the paper said.

"Champion Neymar," said Sport, over a  picture of the player, arms outstretched and looking to heavenwards. "The new Barca star played an exemplary final and led his side to triumph."

Meanwhile, Spain striker Fernando Torres also said the team would be back next year to win the World  Cup after falling into "disarray" as they were vanquished 3-0 by Brazil in Rio de Janeiro.

"You can't win every time," the 29-year-old Chelsea forward and Spain international said in a post-match interview published Monday on Fifa's web site.

Torres described the defeat as a "blip against a team that played better than us" and said the loss would not change Spain's approach in the future.

Spain did not need the loss as a wake-up call or to motivate the players, he said, but the match served as a reminder of how hard it will be to beat Brazil on their own soil next year, he said.

"That said, in one year's time we will be back here as world champions to defend what's ours," Torres said.