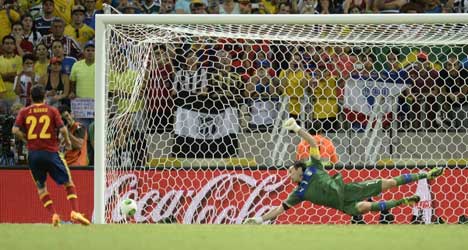 After the semi-final finished goalless following extra time, Leonardo Bonucci proved the fall guy for the Italians, blazing the 13th kick of the shoot-out over the bar before Manchester City new boy Navas calmly tucked his penalty home.

Spain will now seek to complete their set of senior international titles, having also won Olympic gold in Barcelona in 1992, but hosts Brazil were spared a 120-minute semi-final and will have had 24 extra hours to recover.

"It was a very difficult match for us and we'll have to think about what we have to do in the next three days to recover," said Spain coach Vicente del Bosque.

"We will definitely stand up to Brazil in the Maracana and I hope the players will feel as happy as kids about playing there."

Italy were left to curse their luck after initially shackling Spain in the first half, and coach Cesare Prandelli must now galvanise minds and bodies for Sunday's meeting with Uruguay in the third-place play-off.

He nonetheless drew solace from the way his side matched Spain, having seen Italy crushed 4-0 when the sides last met in last year's one-sided Euro 2012 final in Kiev.

"The lads played a great match, from the first minute to the last, and we created plenty of situations that could have won us the game," Prandelli said.

"But once it goes to penalties, anything can happen," he added.

"Spain are currently ahead of us because they've been following the same ideology for years, whereas we're still forging our own path."

Chastened by the memory of the Euro 2012 final, Prandelli reverted to the formula he had successfully used in the 1-1 draw between the sides earlier in that tournament.

Italy lined up with a three-man defence and no fewer than six midfielders at Estadio Castelao, Claudio Marchisio and Antonio Candreva providing support for lone striker Alberto Gilardino.

As a result, Spain's intricate passing exchanges foundered far from the Italian goal, and Prandelli's men were bold in their exploitation of the space behind the Spanish defence.

Right wing-back Christian Maggio was particularly prominent, heading over from a corner and then drawing a fine save from Iker Casillas with a header after Andrea Pirlo picked him out with a raking 60-yard pass.

The Napoli man seemed destined to break the deadlock in the 36th minute when Emanuele Giaccherini's inviting cross found him steaming in on Casillas' goal, but his header was straight at the goalkeeper.

Within seconds, Fernando Torres almost punished Italy, but after neatly outfoxing Andrea Barzagli, he drilled his left-foot shot across goal and wide.

Amid cloying humidity, the intensity dropped in the second half, and Spain occasionally found themselves in the unfamiliar position of hearing their opponents' passing combinations celebrated with chants of 'Ole!'

Spain centre-back Gerard Pique, watched by celebrity girlfriend Shakira, could have settled the tie in the 85th minute, but he blazed over from Navas' low pass and the game went to extra time.

Italy almost broke through in the third minute of the extra period when Giaccherini rattled the post with a rising left-foot drive.

Buffon then had to touch away a low effort from Navas as Spain threatened to snatch victory at the death, but thanks to Bonucci's misfortune, the Spain substitute would still have the final say.