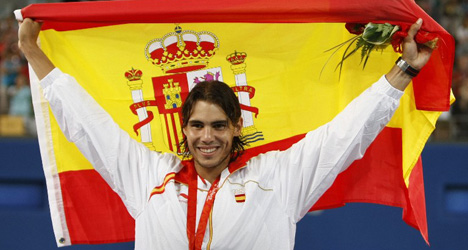 Despite a shock exit from Wimbledon this week, Rafa Nadal is still considered one of the world's most powerful stars. Behrouz Mehri/AFP

The Majorca-born player was rated as the world's 51st most heavy-hitting star in terms of media power, according to Spanish new site Te Interesa.

Check out The Local's list of cashed-up Spanish sports stars.

Real Madrid's Portuguese star player Cristiano Ronaldo was rated 31st while his Barcelona-based football rival Leo Messi came in at 39 on the list.

Nadal has actually fallen in the celebrity power stakes, slipping from 47th place in 2012 .

This is not the only time Nadal has slipped up recently.

His coach and uncle, Toni Nadal, blasted the former World Number 1 on Wednesday after he was knocked out of the 2013 Wimbledon Championships in the first round by unseeded Belgian Steve Darcis.

Nadal's shocking, straight-sets defeat at the hands of a player ranked 135th in the world prompted his coach to say: "For me, what failed him most was his attitude."

"In other places you decide to keep going, fight, and in the end, in the best-case scenario, you can win," he told Spanish media at a sponsor's event on Wednesday.

"Here if you see yourself as less of a winner then it makes things more difficult for you and that's why I tell you that the attitude wasn't the best."