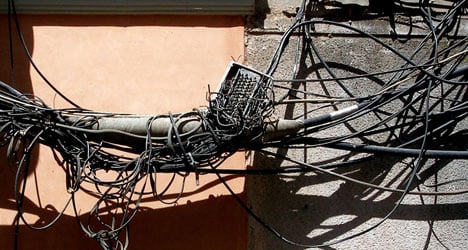 People in Spain get just 66.7 percent of their advertised maximum internet connection speed at peak times, the EU's Quality of Broadband Services in the EU March 2012 report showed.

The report, published in May, compared internet connections across the continent, as part of the EU's Digital Agenda initiative.

It highlighted the fact that most internet connections in Spain use xDSL technology, which relies on existing copper telephone lines.

These lines, which are often older than the internet itself, act as a bottleneck for data connections, preventing customers from achieving the maximum speeds mentioned in their contracts.

Despite this, Spain's average of 66.7 percent of advertised speed is actually higher than the EU average of 60.3 per cent, and well above countries such as the UK (44.7 per cent) and France (40.4 per cent.

But the report says that much of the gap between what's advertised and what is delivered is due to the different ways that broadband speeds are promoted in other countries.

Spain's typical xDSL download speed at peak times was found to be 6.92 Mbps, well short of the European average of 7.23 Mbps.

Cable connections scored much higher, achieving an above-EU-average 96.4 per cent of the speeds advertised, although still falling short of the EU average in absolute speed terms.

FTTx connections in Spain were also slower than the EU average.

Commission Vice President Neelie Kroes said: "Consumers need more of this sort of data to help make informed choices, so we will repeat the exercise."

"And we take these first results as further proof of the need for a real connected single market."

The EU is now calling on volunteers to help with the next phase of the study.

These volunteers will be given a device which measures  their internet connection speeds. The data will be used to provide a clearer picture of this situation in the EU.

For more information on how you can take part, visit the scheme's home page here.