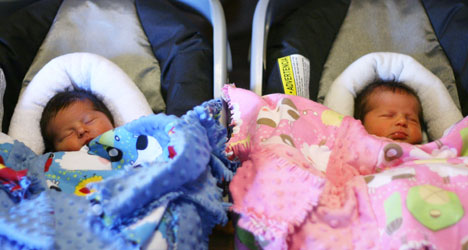 Medical professionals disagree over the controvertial issue of choosing the sex of babies. Photo: bambibabe48/Flickr

The Cefer Reproduction Institute in Barcelona announced on Thursday it had launched an online petition demanding changes to Spain's 2006 Human Reproduction Law.

Although the petition has been officially recognized, the institute must now collect 500,000 signatures for it to come up for the vote in parliament.

Current Spanish legislation forbids the selection of a baby's sex unless there are strong medical grounds, such as a high risk of sex-linked diseases like haemophilia and muscular dystrophy.

Artificial sexual selection is currently only allowed in a handful of countries including the United States, Mexico, Panama, Cyprus, the Czech Republic, Thailand, Nigeria and Jordan.

Simón Marina, medical director of the Cefer Institute, told Spanish daily El País that the petition had been made in response to demand from patients.

He claimed that "a few hundred couples" had requested information in the last year, and 80 percent of them "already had two children of the same sex and sought a balance".

"If it is technically possible, and is done in other countries, why ban it?" he added.

"Choosing the sex of your child is an exercise of freedom," said Marina, who also considers sex selection to be a "legitimate reproductive right".

"There are many couples who travel to other countries to undergo this treatment," he said, adding that his clinic "aims to make this technique available to those who do not have the resources to go abroad".

Although the petition has the support of Spain's National Association of Assisted Reproduction (ANACER), it has attracted opposition from other medical professionals.

Roberto Matorras, head of the Human Reproduction Unit of Cruces Hospital in Bilbao, told Spanish daily El Mundo that, as with any medical intervention, "there is a risk, albeit a small one".

"I personally am not in favour," he said, expressing concern that the debate could "trivialize assisted reproduction".

The president of the Spanish Society of Gynecology and Obstetrics, José María Lailla, was said by El País newspaper to be "surprised" to learn of the clinic's initiative.

"We are talking about selecting embryos without a scientific reason," he said.

"When the controversy about a-la-carte children was first raised I found it, as I do now, somewhat unscientific and unethical."

Laila added: "What sense does it make to have that choice?"

"Next it will be for those who want to have a blonde girl."

"The mission of reproduction clinics is to allow couples with fertility problems to have children," he said.