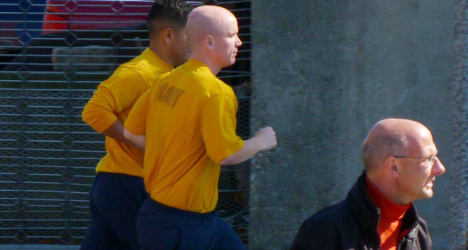 The 3,850-metre event is being put on by Ángel Campos and Miguel Montenegro, neighbours in the small town of Vilalba in Galicia's Lugo province.

"It all started out as a bit of a joke," the sporty Campos told The Local by telephone.

"I was in my friend Miguel's bar after I had completed a run, and he suddenly said, 'Why not put on a race just for bald people?'"

This was meant a sly dig: Campos is very bald while Montenegro still boasts a good head of hair.

But the race idea grew and grew.

"When we started out, we thought it would be just a few people from the village doing the run, but then the local newspapers took an interest," said Campos.

"Now it has become the first-ever international race for bald people.

"We've chosen a route which won't disturb traffic too much, and the local town hall have given us permission to close off the streets for the race," explained the organizer.

Despite all the logistical planning, though, the prizes in the inaugural hairless running event remain in keeping with its humorous origins.

First across the line will go home with two melons, second prize is a dozen free-range eggs, and the third prize is a light bulb.

"Although we might have to change that," Campos told The Local.

"It turns out these energy-saving bulbs are more expensive than the melons."

Campos also added a noted of warning to people who might be looking to cheat the system to nab these prizes: "You have to be naturally bald. It's not enough to shave your head."

The sporty Campos — he has completed the famous Camino de Santiago pilgrimage five times — told The Local about 24 people had already enrolled for Friday's race.

"We are hoping that 15 to 20 people more sign up before the event as well," he added.

Campos said that if all goes well, they hope to stage the race again next year.

"Not everybody takes to alopecia well. It can be quite demoralizing, but it doesn't have to be something negative."

Asked whether he himself is bothered by the lack of hair on his head, Campos laughed.

"I'm a chef, and for me having no hair is very practical. It means there is never any hair in the food."