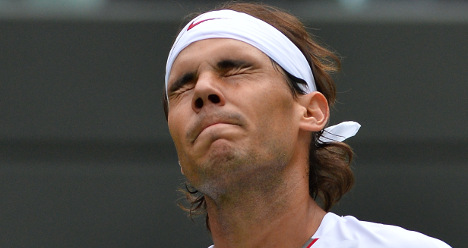 Rafa Nadal has never before been knocked out of a Grand Slam tournament by such a low ranked opponent. Photo: Ben Stansall/AFP

Obviously impeded by a problem with his left knee, the number five seed struggled all day to make an impact.

Nadal's fighting characteristics remained on display, however: he survived eight break points against him before giving up the first set.

Meanwhile, Darcis took advantage of his opponent's injury, exploiting the angles of the court to land the ball in positions unreachable for the wounded Majorcan.

"I tried my best out there in every moment. It was not possible for me," said Nadal, after playing on grass for the first time this season. "It is not a tragedy."

The player, who only recently made tennis history by winning his eighth French open, refused, though, to be drawn on the state of his knee.

But for the unheralded Darcis, meanwhile, this was a victory to be savoured.

"I have always played well on grass, perhaps not here where I have had some tough draws, but I am really happy," said the Belgian.