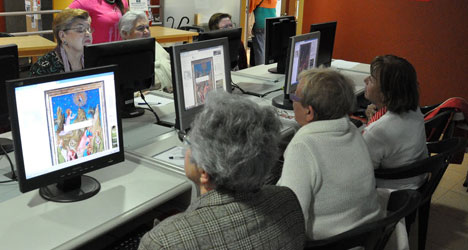 Overall use of internet technology in Spain was rated as 'medium-low' in the Orange Foundation's eEspaña report, according to national daily El País.

Spain came 16th of the European Union's 27 member states, falling far short of standards in Nordic countries, Europe's most developed in internet terms, and of those in the UK, France and Germany.

The Orange Foundation's eEspaña report looked at the exclusion of certain groups in society from access to the internet and related technologies.

People on low-incomes, those with low levels of education, the elderly and those living in rural communities were among those studied,

The report placed Spain just ahead of countries including Malta, the Czech Republic, Poland, Slovenia, Romania and Greece but behind Latvia, Estonia and Lithuania.

Although access to new technologies for Spain's elderly has increased since the introduction of the Avanza plan in 2006, funded by the EU in partnership with national and regional governments,  over 57 percent of the country's over-55s have never used a computer and 64% have never used the internet.

Of those who have been online, only 29 percent do so at least once a week.

Study leader Francesco Sanduli, Professor of Organization and Management at Madrid's Computense University, said that Spain lags behind its European rivals "because the Spanish Digital Agenda has been frozen pending budget reviews after the government's 2012 'year of reflection'.

Before the budgetary hiatus, "Spain was the EU's most-improved country for access and use of new technologies, with an increase over 40% over the 2006 to 2011 period of the first and second Avanca plans," Sanduli said.