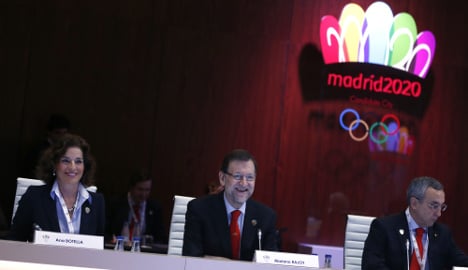 A final decision on whether it will be Madrid, Tokyo or Istanbul that wins the right to host the XXXII Olympiad will be made in Buenos Aires on September 7th and there is a growing belief that after failed bids for the previous two summer Games, the degree of public support could drive Madrid to success this time around.

"We deserve the Games and it is a collective dream, not just in Madrid but in Spain in general that it becomes a reality," mayor Ana Botella said as she formally opened the event.

In keeping with the bid for the games, a number of the city's landmarks were used for events with beach volleyball taking place in Retiro park, whilst crowds took part in aerobic and cardiovascular training sessions outside Real Madrid's Santiago Bernabeu stadium.

However, the main even was an eight kilometre run that started at 10:30pm local time, to coincide with the time when the winner of the bid will be announced in Buenos Aires, in which 30,000 people took part.

And bid president Alejandro Blanco believes the event was a clear demonstration of the public support for the bid.

"The opinion polls talk of more than 80% of public support, but it is enough to take a look at the streets of Madrid to see that this city wants the Games. This is the best opinion poll you could have and these images will be seen around the world," he said.

Indeed, 81 percent of Madrid's citizens are said to be in favour of the bid despite Spain's ongoing economic crisis.

The bid leaders have consistently stressed that the cost of hosting the Games will not come close to the nearly £9 billion ($13.9 billion) the London 2012 Games cost due to the majority of the sporting stadia and infrastructure already being in place.

Moreover, there is the hope that the Games could even help stimulate the Spanish economy.

The bid process will take another step closer to its conclusion on Tuesday when the International Olympic Committee's Evaluation Committee will publish its reports on the visits it made to all three cities back in March.